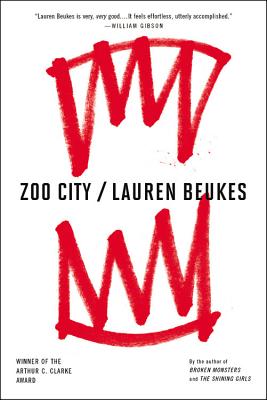 A new edition of Lauren Beukes's Arthur C Clarke Award-winning novel set in a world where murderers and other criminals acquire magical animals that are mystically bonded to them.

Zinzi has a Sloth on her back, a dirty 419 scam habit, and a talent for finding lost things. When a little old lady turns up dead and the cops confiscate her last paycheck, Zinzi's forced to take on her least favorite kind of job -- missing persons.

Being hired by reclusive music producer Odi Huron to find a teenybop pop star should be her ticket out of Zoo City, the festering slum where the criminal underclass and their animal companions live in the shadow of hell's undertow. Instead, it catapults Zinzi deeper into the maw of a city twisted by crime and magic, where she'll be forced to confront the dark secrets of former lives -- including her own.

"Beukes's energetic noir phantasmagoria, the winner of this year's Arthur C. Clarke Award, crackles with original ideas. (...) Beukes skillfully employs all the twists of first-rate noir. An ending that includes a giant crocodile may be more conventional than the setup, but it's still powerful indeed."
—Jeff VanderMeer, The New York Times Book Review

Lauren Beukes writes novels, comics and screeplays. She's the author of the critically-acclaimed international bestseller Broken Monsters; The Shining Girls, about a time traveling serial killer; Zoo City, a phantasmagorical Joburg noir and winner of the 2011 Arthur C Clarke Award; and the neo-political thriller Moxyland. She worked as a journalist and as show runner on one of the South Africa's biggest animated TV shows, directed an award-winning documentary, and wrote the New York Times bestselling graphic novel, Fairest: The Hidden Kingdom. She lives in Cape Town, South Africa.
Loading...
or support indie stores by buying on