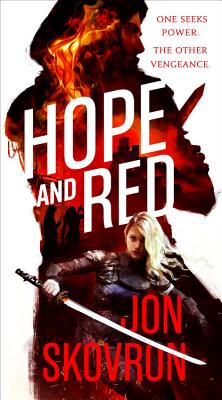 Hope and Red (The Empire of Storms #1)

In the first book of this fun, action-packed fantasy trilogy, a warrior and a thief must come together to stop the forces that threaten their people.

Hope's old life ended the night her entire village was massacred by the emperor's forces. Now, trained in secret by a master warrior, her new life is centered on only one goal: vengeance.

Red lives by the skin of his teeth and sharpness of his wit. An expert thief and a brilliant con artist, he cares for only one thing: a good time. But when the empire's soldiers start to encroach on his territory, taking down his friends with it, he may have to re-prioritize.

Together, they will take down an empire.

Start reading this daring adventure that Sam Sykes called, "Furious where it needs to be, deceptively tender where it can get away with it, adventurous all around!"

Praise For Hope and Red (The Empire of Storms #1)…

"Furious where it needs to be, deceptively tender where it can get away with it, adventurous all around."—Sam Sykes

"Hope and Red is my favorite book of the year. Full of nonstop, irresistible adventure, it captures that wonderful classic epic fantasy feel, while introducing a fantastic pair of memorable new heroes. I can't wait for the sequel!"—Sarah Beth Durst, author of The Queen of Blood

"Engaging ... [Skovron's] skillfully developed world, filled with swords and magic, is a perfect foil for his dynamic characters."—Library Journal

"A fun beginning ... promises to be a great series."—Philadelphia Free Press

"The adventures of Hope and Red will continue, and you should plan to sail with them."—SFRevu

"Gripping and, most importantly, fun."—SFX

Jon Skovron is the author of several young adult novels and his short stories have appeared in publications such as ChiZine and Baen's Universe. He lives just outside Washington, D.C. with his two sons and two cats. The Empire of Storms is his first adult fantasy series.
Loading...
or
Not Currently Available for Direct Purchase