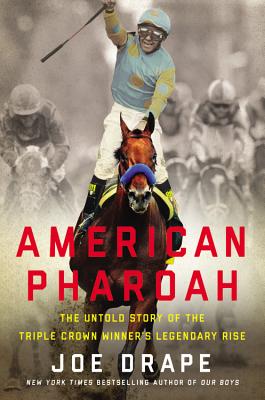 The Untold Story of the Triple Crown Winner's Legendary Rise

History was made at the 2015 Belmont Stakes when American Pharoah won the Triple Crown, the first since Affirmed in 1978. As magnificent as the champion is, the team behind him has been all too human while on the road to immortality.

Written by an award-winning New York Times sportswriter, American Pharoah is the definitive account not only of how the ethereal colt won the Kentucky Derby, Preakness, and Belmont Stakes, but how he changed lives. Through extensive interviews, Drape explores the making of an exceptional racehorse, chronicling key events en route to history. Covering everything from the flamboyant owner's successful track record, the jockey's earlier heartbreaking losses, and the Hall of Fame trainer's intensity, Drape paints a stirring portrait of a horse for the ages and the people around him.

Joe Drape is an award-winning sportswriter for the New York Times. A native of Kansas City and graduate of Rockhurst High School, Drape earned a Bachelor of Arts degree in English from Southern Methodist University. After reporting for numerous local papers and winning awards, Joe came to the New York Times in 1998 to cover college sports and horse racing.

A New York Times bestselling author, Drape's work has been honored nationally by the Associated Press Sports Editor. He is a two-time Eclipse Award winner for outstanding coverage in thoroughbred racing. He lives in New York City with his wife, Mary Kennedy, and son, Jack.

"The tale [Drape] spins ends up being one that transcends athletics, a
story of adolescence and smalltown life. . . . From the opening practice
to the Redmen's final game, Drape flawlessly paints a picture of how
Smith Center achieves perfection year after year. . . . Drape gives the
reader a team worth rooting for."—Publishers Weekly

"American Pharoah is lucky to have Joe Drape. Actually, they're lucky to have each other. No horse has given the preeminent chronicler of 21st century thoroughbreds better material and no other writer could do justice to such a terrific athlete and story. They deserve each other-and anyone who cares about horse racing deserves this book."—Jeremy Schaap, author of Cinderella Man and Triumph

"There is much to admire in this comprehensive and often candid book."
—Washington Post


"There is much to savor in the 292 pages...Drape delivers lively accounts of the sport's biggest events and the assorted newsmakers, on and off the track."—Bergen Record

"Drape takes the reader behind the gate for the inside story of American Pharoah's climb, and to the track for every dust-flying, crowd-roaring minute."—Garden and Gun

"Nobody writes about horses like Joe Drape. He takes you around the track, makes you hear the roar, feel the thrill, see the rich, shadowy, behind-the-scenes world so few us really understand. His writing is as effortless as it is necessary. American Pharoah is an epic American classic, a modern-day Seasbiscuit. If you read just one book about horse racing, read this one."—Drew Jubera, author of Must Win: A Season of Survival for a Town and Its Team

"A page-turner .... With his deep knowledge of horse racing, and sharp eye for detail, Drape weaves a compelling narrative from an unlikely cast of characters around an even more unlikely four-legged hero."—National Book Review