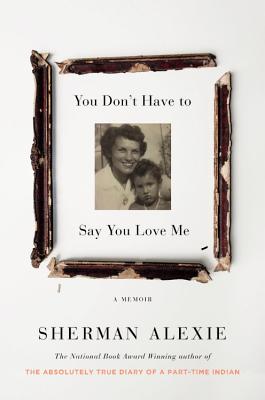 You Don't Have to Say You Love Me

A searing, deeply moving memoir about family, love, loss, and forgiveness from the critically acclaimed, bestselling National Book Award-winning author of The Absolutely True Diary of a Part-Time Indian.

Family relationships are never simple. But Sherman Alexie's bond with his mother Lillian was more complex than most. She plunged her family into chaos with a drinking habit, but shed her addiction when it was on the brink of costing her everything. She survived a violent past, but created an elaborate facade to hide the truth. She selflessly cared for strangers, but was often incapable of showering her children with the affection that they so desperately craved. She wanted a better life for her son, but it was only by leaving her behind that he could hope to achieve it. It's these contradictions that made Lillian Alexie a beautiful, mercurial, abusive, intelligent, complicated, and very human woman.

When she passed away, the incongruities that defined his mother shook Sherman and his remembrance of her. Grappling with the haunting ghosts of the past in the wake of loss, he responded the only way he knew how: he wrote. The result is a stunning memoir filled with raw, angry, funny, profane, tender memories of a childhood few can imagine, much less survive. An unflinching and unforgettable remembrance, You Don't Have to Say You Love Me is a powerful, deeply felt account of a complicated relationship.

Praise For You Don't Have to Say You Love Me: A Memoir…

Praise for YOU DON'T HAVE TO SAY YOU LOVE ME:

"With brazen honesty and humor throughout, Alexie writes about the many facets of his mother and her addiction's effect on his family and childhood."
—Jarry Lee, BuzzFeed, "22 Exciting New Books You Need to Read This Summer"

"Blends poetry and prose, and varies widely in tone as he explores old memories and new grief."—Entertainment Weekly, Summer's 20 Must Read Books

"He specifically focuses on his late mother, showing the many sides of her multifaceted character through dozens of poignant poems and essays. Their relationship is as complicated as Alexie's stories are enthralling."—Stephanie Topacio Long, Bustle, 14 Best Nonfiction Books Coming Out in June 2017

"Sherman Alexie makes poetry out of the darkest parts of his (and his mother's) life... It's all a mighty attempt to understand who his mother was, who she is to him, and how to make peace with her."—Jaime Green, Google Play, Summer Reading

"There's straight personal history here, as well as fable, poetry, and raw and mordant accounts of life....Unexpected revelations are a constant throughout this memoir"—Maureen Corrigan, NPR's "Fresh Air", 6 Books That Will Carry You Away

"Evident throughout are humor and rage, respect and loving irreverence."
—Oprah Magazine

"The overwhelming takeaway from Mr. Alexie's memoir is triumph, that of one writer's ability to overcome hardscrabble roots, medical bad luck and generations of systemic racism--all through an uncommon command of language and metaphor."
—James Yeh, New York Times

"If candor is Alexie's superpower, accuracy might be his nemesis.... Throughout, Alexie is courageous and unflinching, delivering a worthy and honest eulogy by showing us his mother and himself in full, everything spectacular and everything scarred."—Michael Kleber-Diggs, The Minneapolis Star Tribune

"You Don't Have to Say You Love Me is a marvel of emotional transparency."
—Beth Kephart, The Chicago Tribune

"These pages are scored by resentment, hurt, guilt, anger, fear, but they are also full of gratitude, admiration, and tenderness."
—Priscilla Gilman, The Boston Globe

"Alexie is so aware of his own fallible memory and his own imperfections that this one won't make you bristle...It's readable, unpretentious, funny and deeply compassionate."

"This is an essay, a memoir, a history, a cry from the heart, a challenge to other Indians and a baring of his soul."
—Michael Giltz, Huffington Post

"Full of compassion and wonder, pain and beauty and is a searing testament to the ways in which our parents and our pasts fully make us who we are as adults."
—Kristin Iversen, Nylon

"Alexie's writing is raw, funny, smart and unapologetic. His use of metaphor expertly crafts a visual to accompany his stories that leave them unforgettable."
—Catherine Rubino, Book Reporter

"Everything you love about Alexie's writing is here: he still manages to find honest human comedy in the darkness of America's genocidal past, and our deeply racist present" and also raves "His personality is large and, as he survives each passing trial, it's only getting larger; from his adoring audience's vantage point, Alexie is now a giant."

"Written in his familiar breezy, conversational, and aphoristic style, the book makes even the darkest personal experiences uplifting and bearable with the author's wit, sarcasm, and humor...a powerful, brutally honest memoir about a mother and the son who loved her."
—Kirkus Reviews

"Alexie is a consummate, unnerving and funny storyteller...pouring himself into every molten word. Courageous, anguished, grateful, and hilarious, this is an enlightening and resounding eulogy and self-portrait...all will be reaching for this confiding and concussive memoir."
—Booklist (Starred Review)

"[A] poignant, conflicted, raucous memoir of a Native American family...a fine homage to the vexed process of growing up that vividly conveys how family roots continue to bind even after they seem to have been severed."—Publishers Weekly

"Honest, wrenching, and incredibly moving....Highly recommended for all readers. Alexie's portrayals of family relationships, identity, and grief have the universality of great literature."—Library Journal (Starred Review)

Bookseller Praise for YOU DON'T HAVE TO SAY YOU LOVE ME:


"'How does one deliver an honest eulogy?' Alexie asks. And 'how does one commemorate/ the ordinary?' The answer is to remember, confess, pray, rant, and ask more questions. Alexie does all these and more in this powerful, poignant memoir of his mother, a woman so complex she's an entire tribe of contradictions. Did she love him? Did he love her? He answers yes, but worries the questions through stories by turns angry, funny, and raw, and through a dazzling range of poems that include everything from ballads to rhymed couplets to a tour de force sequence of 52 haiku, each as perfect as the squares in the quilts his mother sewed to support the family. While his father steadily drank himself to death, Alexie's mother was a recovering alcoholic who kept her family alive, if often hungry, in an unfinished HUD house on the Spokane Indian Reservation. She was honored by her tribe for her strength and generosity, yet she was often cruel to her children. With this jarring inconsistency at the heart of his brave, compassionate, book, Alexie traces a lineage of violence so powerful it causes victims to become perpetrators."—Laurie Greer, Politics & Prose (Washington, D.C.)

"I am mesmerized by this book that is painful as they come yet has me hooked. [...] I cannot put it down as his raw honesty and quirky style has gripped me in some kind of way that is hard to describe. [W]hen I do things like drive to work or make dinner I keep thinking about it..."—Sheryl Cotleur, Copperfield's Books (Sebastopol, CA)

"To say that I was moved by Sherman Alexie's memoir is a terrible understatement; in fact, there is a pulse in this book that has worked its way into my being and irrevocably changed how I think about my own life. Alexie's kaleidoscopic approach to storytelling is so representative of the feeling of being human, with childhood memory, relationships, love, trauma, and art all moving in and out of focus at once. At the center of YOU DON'T HAVE TO SAY YOU LOVE ME is a deep grieving, for Alexie's mother, for the ways in which parental love is imperfect, for unthinkable personal and cultural traumas. But Alexie's brilliance is in holding multiple truths, that one can experience simultaneously both trauma and hope, grief and humor, violence and love. I, like Alexie, "tend to fall in love with the unnamable," that nebulous complexity at the heart of the human experience that can only be understood by holding on to all of the pieces of your life at once, a practice both beautiful and terrifying. Alexie achieves this exquisitely, and YOU DON'T HAVE TO SAY YOU LOVE ME is an unforgettable work.—Kelsey O'Rourke, Literati Bookstore (Ann Arbor, MI)

On Reservation Blues:
"His talent is immense and genuine.... Sherman Alexie is one of the best writers we have."
- The Nation

"Hilarious but poignant...dead-on accurate with regard to modern Indian life."
--Publisher's Weekly

On Indian Killer:
"A haunting, challenging articulation of the plight and the pride of contemporary Native Americans."
- Kirkus Reviews, starred review

"Characters in Mr. Alexie's work are not the usual kind of Indians...They are not tragic victims or noble savages...they listen to Jimi Hendrix and Hank Williams; they dream of being basketball stars...And unlike most Indians in fiction, they are sometimes funny."
--The New York Times

On The Absolutely True Diary of a Part-Time Indian:

"Sure to resonate and lift spirits of all ages for years to come."
--USA Today

Sherman Alexie is one of the most acclaimed and bestselling novelists in America. The Absolutely True Diary of a Part-Time Indian, which won the National Book Award for Young People's Literature, was a #1 New York Times bestseller and has more than two million copies in print.

Along with the National Book Award, the novel was a 2008 Horn Book Award Winner for Excellence in Children's Literature, a Booksense Book of the Year Children's Literature Honor Book, a Los Angeles Times Book Prize Finalist, and one of the New York Times Notable Children's Books of 2007. Alexie has also written eleven books of poetry, three story collections, and three novels for adults: Reservation Blues, Indian Killer, and Flight.