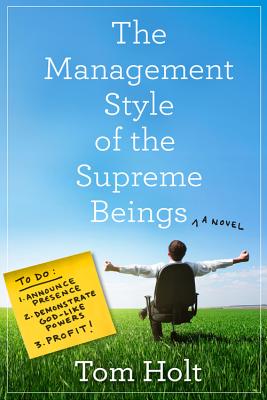 The Management Style of the Supreme Beings

When the Supreme Being and his son decide that being supreme isn't for them any more, it's inevitable that things get a bit of a shake-up.

It soon becomes apparent that our new owners, the Venturi brothers, have a very different perspective on all sorts of things. Take Good and Evil, for example. For them, it's an outdated concept that never worked particularly well in the first place.

Unfortunately, the sudden disappearance of right and wrong, while welcomed by some, raises certain concerns amongst those still attached to the previous team's management style.

In particular, there's one of the old gods who didn't move out with the others. A reclusive chap, he lives somewhere up north, and only a handful even believe in him.

But he's watching. And he really does need to know if you've been naughty or nice.

Praise For The Management Style of the Supreme Beings…

"This is a must-read for those who grew up in awe of The Phantom Tollbooth...Holt achieves near-perfection in his new comic fantasy."—Publishers Weekly (Starred Review) on The Good, The Bad and The Smug

"Exceedingly clever and funny."
—RT Book Reviews on The Good, The Bad and The Smug

"Satisfying and entertaining."
—RT Book Reviews on The Outsorcerer's Apprentice

"Holt has a zany humor that will appeal to fans of Terry Pratchett and Christopher Moore."
—Library Journal on The Outsorcerer's Apprentice

"Tom Holt's Doughnut presents a roller-coaster ride through the world of physics and the origins of the universe."—Library Journal on Doughnut

"A light read from the prolific humorist; a romp round the multiverse."
—SFX on Doughnut

"Like the deep-fried snack after which it's named, this sci-fi novel is sweet and fun."
—Sun (UK) on Doughnut

"Holt adds to his repertoire of comedic sf, one of the most difficult genre acts to master. Theo is an engaging hero; his brilliance is counteracted by his laziness and his compassion, which is matched by his sense of survival. Place this title alongside Terry Pratchett and Neil Gaiman's Good Omens, Pratchett's "Discworld" series, and the absurdist works of mainstream authors such as John Barth and Gilbert Sorrentino."—Library Journal (Starred Review) on Doughnut

"One for physicists as well as Krispy Kreme-loving policemen."
—T3 on Doughnut

Tom Holt was born in London in 1961. At Oxford he studied bar billiards, ancient Greek agriculture and the care and feeding of small, temperamental Japanese motorcycle engines; interests which led him, perhaps inevitably, to qualify as a solicitor and emigrate to Somerset, where he specialized in death and taxes for seven years before going straight in 1995. He lives in Chard, Somerset, with his wife and daughter.
Loading...
or
Not Currently Available for Direct Purchase