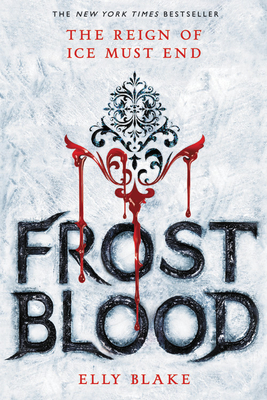 Seventeen-year-old Ruby is a Fireblood who has concealed her powers of heat and flame from the cruel Frostblood ruling class her entire life. But when her mother is killed trying to protect her, and rebel Frostbloods demand her help to overthrow their bloodthirsty king, she agrees to come out of hiding, desperate for revenge.

Despite her unpredictable abilities, Ruby trains with the rebels and the infuriating—yet irresistible—Arcus, who seems to think of her as nothing more than a weapon. But before they can take action, Ruby is captured and forced to compete in the king's tournaments that pit Fireblood prisoners against Frostblood champions. Now she has only one chance to destroy the maniacal ruler who has taken everything from her—and from the icy young man she has come to love.

"Ruby's a spitfire who faces her challenges with grit.... A slow-burning, classic tale."—Kirkus Reviews

"A strong debut for Blake.... succeeds in laying down intriguing framework for the books to come."—Publishers Weekly

"Ruby and Arcus don't disappoint."—Bulletin of the Center for Children's Books

"A fun, effortless first installment in a new series with a high PoP (probability of popularity)."—The Globe and Mail

Elly Blake is the New York Times bestselling author of Frostblood, Fireblood, and Nightblood. She lives in Southwestern Ontario with her husband, kids, and a Siberian Husky mix that definitely shows frostblood tendencies. Find her online at EllyBlake.com or @elly_blake.
Loading...
or support indie stores by buying on