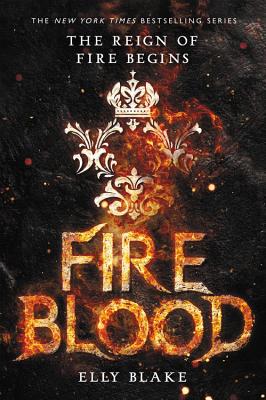 In this action-packed sequel to the New York Times bestselling Frostblood, Ruby must choose between her fiery homeland and the icy king who loves her.

Against all odds, Ruby has defeated the villainous Frost King and melted his powerful throne. But the bloodthirsty Minax that was trapped inside is now haunting her kingdom and everyone she loves. The answers to its demise may lie to the south in Sudesia, the land of the Firebloods, and a country that holds the secrets to Ruby's powers and past....

Despite warnings from her beloved Arcus, Ruby accompanies a roguish Fireblood named Kai to Sudesia, where she must master her control of fire in a series of trials to gain the trust of the suspicious Fireblood queen. Only then can she hope to access the knowledge that could defeat the rampaging Minax--which grows closer every moment. But as sparks fly in her moments alone with Kai, how can Ruby decide whom to trust? The fate of both kingdoms is now in her hands.

Elly Blake is the New York Times bestselling author of Frostblood, Fireblood, and Nightblood. She lives in Southwestern Ontario with her husband, kids, and a Siberian Husky mix that definitely shows frostblood tendencies. Find her online at EllyBlake.com or @elly_blake.

Praise For Fireblood (The Frostblood Saga #2)…

Praise for Fireblood:
"Brimming with new adventures, Ruby's story shimmers and expands.... a thrilling romp through an engrossing world. A sucker punch of escalating evil, sizzling romance, and a spitfire coming into her own."
—Kirkus Reviews

"A satisfying sequel. The plot is well paced and engaging...Fans of the series will not be disappointed."—School Library Journal


"[Ruby] is an interesting, layered character. Fans of the first adventure will definitely be drawn to this sequel."—Booklist

"Fans of Frostblood will find themselves smitten with this second installment, and the breathtaking climax will leave them eagerly awaiting the third."—Shelf Awareness

Praise for Frostblood:
"This series opener is perfect for fans of Victoria Aveyard's Red Queen and will delight those who love fantasy, adventure, and romance. A strong addition to any YA fantasy collection."—School Library Journal

"This enchanting and fast-paced debut lights up the page with magic, romance, and action, all of which is expertly interwoven throughout the text. Readers will be eagerly anticipating the next book in the series."—Booklist

"Ruby's a spitfire who faces her challenges with grit."—Kirkus Reviews

"This strong debut for Blake succeeds in laying down intriguing framework for the books to come."—Publishers Weekly

"With a fierce and vibrant world, richly-drawn characters, a steamy romance, and page-turning twists, Frostblood has all the elements of a great fantasy."
—Morgan Rhodes, New York Times bestselling author of the Fallen Kingdoms Series

"Fast-paced and brimming with magic and intrigue, Frostblood will keep you frozen in place until the last page and then leave you burning for more."—Lori M. Lee, author of Gates of Thread and Stone
or
Not Currently Available for Direct Purchase
Copyright © 2020 American Booksellers Association