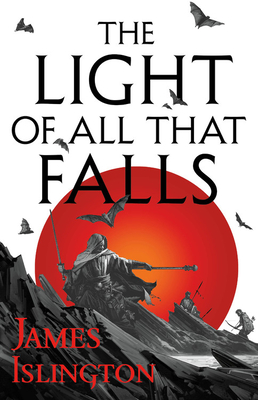 The Light of All That Falls (The Licanius Trilogy #3)

The journey that began with The Shadow of What Was Lostreaches its spectacular conclusion in The Light of All That Falls, the final chapter of the Licanius Trilogy by acclaimed epic fantasy author James Islington.
After a savage battle, the Boundary is whole again -- but it may be too late. Banes now stalk the lands of Andarra, and the Venerate have gathered their armies for a final, crushing blow.
In Ilin Illan, Wirr fights to maintain a precarious alliance between Andarra's factions of power. With dark forces closing in on the capital, if he cannot succeed, the war is lost.
Imprisoned and alone in a strange land, Davian is pitted against the remaining Venerate. As he desperately tries to keep them from undoing Asha's sacrifice, he struggles to come to terms with his own path and all he has learned about Caeden, the friend he chose to set free.
Finally, Caeden is confronted with the reality of a plan laid centuries ago -- heartbroken at how it started and devastated by how it must end.

The Licanius TrilogyThe Shadow of What Was LostAn Echo of Things to ComeThe Light of All That Falls
"Love The Wheel of Time? This is about to become your new favorite series." - B&N SciFi & Fantasy Blog

"Reminiscent of Robert Jordan or Brandon Sanderson, Islington's writing is refreshingly fast paced, with a light and clever touch."—Booklist on An Echo of Things to Come

"Islington's magic-soaked setting has plenty of opportunities for conflict between competing powers even as earth-shattering evil approaches. Epic fantasy fans will enjoy this dense, suspenseful adventure."—Publishers Weekly on An Echo of Things to Come

"Fans of this genre will find themselves immersed in the magical battles, suspense and backstabbing political intrigue."—RT Book Reviews on An Echo of Things to Come

"Ingeniously plotted...Islington's natural storytelling ability provides incessant plot twists and maintains a relentless pace...A promising page-turner from a poised newcomer."—Kirkus on The Shadow of What Was Lost

"The plot twists are unexpected, the world building is fascinating, and the fledgeling love story is a charmer.... This sweeping and compelling epic is ripe for a sequel."—Booklist on The Shadow of What Was Lost

James Islington was born and raised in southern Victoria, Australia. His influences growing up were the stories of Raymond E. Feist and Robert Jordan, but it wasn't until later, when he read Brandon Sanderson's Mistborn series -- followed soon after by Patrick Rothfuss' Name of the Wind -- that he was finally inspired to sit down and write something of his own. He now lives with his wife and daughter on the Mornington Peninsula in Victoria.
Loading...
or support indie stores by buying on
(This book is on backorder)