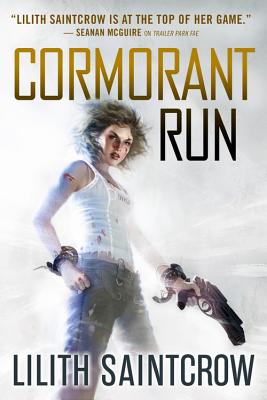 
Since the Event certain people have gone into the drift. . . and come back, bearing priceless technology that's almost magical in its advancement. When Ashe -- the best Rifter of her generation -- dies, the authorities offer her student, Svinga, a choice: go in and bring out the thing that killed her, or rot in jail.
But Svin, of course, has other plans. . .

How far would you go and what would you risk to win the ultimate prize?

"So refreshing and original... With non-stop action, you won't be able to put down Cormorant Run!"—RT Book Reviews

"A down-and-dirty caper set in a dangerous and enigmatic world."—Kirkus

"Trailer Park Fae is what you'd get if you mixed a Bourne film, a political thriller, and a weepy Lifetime movie about abusive, drunken trailer park fathers together, and shook vigorously."—Fantasy Blog on Trailer Park Fae

"Lilith Saintcrow spins an incredibly imaginative and delicious tale with vivid language and a story you will not be able to put down. I loved every minute!"—Darynda Jones on Trailer Park Fae

"A true faery story, creepy and heroic by turns. Love and hope and a touch of Midsummer Night's Dream. I could not put it down."—Patricia Briggs on Trailer Park Fae

"Saintcrow's urban fantasy series launch is expertly crafted with heartbreak and mistrust, far darker and lovelier than the title suggests... Saintcrow's artful, poignant descriptions remain with the reader long after the tale's end, as does the persistent sense of dark, unsettling unease."—Publishers Weekly on Trailer Park Fae

"Painfully honest, beautifully strange, and absolutely worth your time. Lilith Saintcrow is at the top of her game. Don't miss this."—Seanan McGuire on Trailer Park Fae