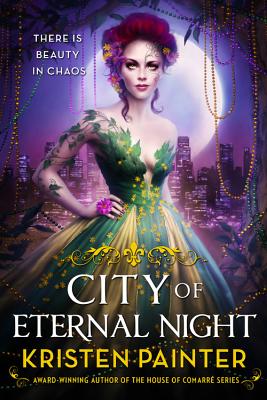 House of Comarré author Kristen Painter weaves a tale of intrigue and betrayal, as the battle for New Orleans escalates in this second novel of the Crescent City series.

Mardi Gras approaches, bringing with it hordes of tourists eager to see the real-life Faery Queen holding court atop her festival float. When the Queen is kidnapped, it's up to Augustine, the fae-blooded Guardian of the city, to rescue her before time runs out.

But Augustine's mystifying protégée, Harlow, complicates the task by unintentionally aiding the forces of evil, drawing danger closer with each step. The Queen might not be the first to die. . .

Kristen Painter likes to balance her obsessions with shoes and cats by making the lives of her characters miserable and surprising her readers with interesting twists. She currently writes award-winning urban fantasy for Orbit Books.

"Painter creates an intricate, well-crafted plot, along with compelling, distinctive characters and an enthralling twist... this story will definitely have readers turning pages all night!"—RT Book Reviews on City of Eternal Night (Top Pick!)

"Painter delivers on her promise of excitement and romance in the second installment of the Crescent city Series."—Publishers Weekly on City of Eternal Night

"[Kristen Painter's] rich, modern storytelling lays out an intricate plot layered with plenty of action and intrigue. Exquisite characters lie at the center of this story... From the first page, House of the Rising Sun is truly a superb and exciting read."—RT Book Reviews (4.5 Stars), Top Pick! on House of the Rising Sun
or support indie stores by buying on
Copyright © 2020 American Booksellers Association