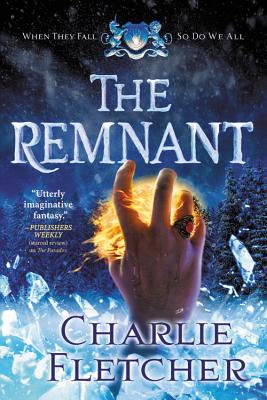 The Remnant (The Oversight #3) (Paperback)

"Exciting, exhilaring, scary and moving in equal measure, The Oversight is a teeming world of dark deeds and dark magics, brilliantly realized." - M. R. Carey
The Oversight of London has been sworn for millennia to prevent the natural and the supernatural worlds from preying on each other.
Now, at its lowest ebb, with its headquarters destroyed and its last members scattered far and wide, this secret society will battle for survival and face the harshest foe it has ever met: itself.
The Oversight series
The Oversight
The Paradox
The Remnant

Charlie Fletcher is the author of the internationally acclaimed Stoneheart trilogy. He also writes for film, television and as a newspaper columnist. Charlie lives in Edinburgh with his wife and two children.

Praise For The Remnant (The Oversight #3)…

"[Fletcher] drives this impressive array of plot strands along with panache and dexterity... so rich is the characterization and surprising the narrative."—Kirkus (starred review)

"Those already familiar with this world will be delighted, and newcomers will eagerly lose themselves in this utterly imaginative fantasy."—Publishers Weekly (starred review) on The Paradox

"A thoughtfully dense, fully realized construct.... Best of all, you never know where it's going next. As good as or better than the opener. Grab."—Kirkus on The Paradox

"A teeming world of dark deeds and dark magics, brilliantly realized. This feels like the start of something amazing."—M. R. Carey on The Oversight

"Fletcher's Victorian London is juicily vivid, and laced with macabre wit. There's a real sense of grim danger, both natural and unnatural, hungrily awaiting the slightest mis-step."—Frances Hardinge on The Oversight

"I couldn't stop reading... It really is a richly atmospheric and intensely readable slice of Victoriana: gothic as all get out, with a splendidly eerie sense of the way the unearthly lies cheek-by-jowl with the mundane. Cheerable goodies, grotesque baddies: the whole book is adventurous and flavorsome and gripping. I really enjoyed it."—Adam Roberts on The Overight

"I'll certainly be reading the next one."—Cory Doctorow, BoingBoing.net on The Oversight

"It's oh so moreish a morsel. I'd read a prequel this evening, a sequel as soon as."—Niall Alexander, Tor.com on The Oversight

"A trilogy worth sinking your teeth into."—SciFi Now on The Oversight