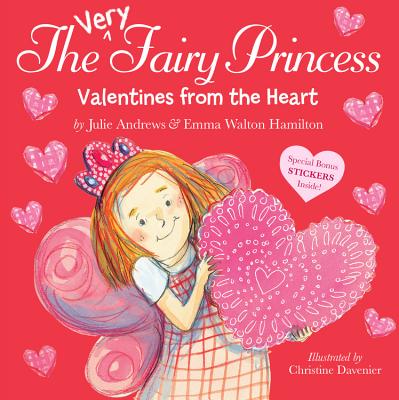 Valentines from the Heart

Gerry makes beautiful cards for her friends at school, showcasing their special qualities. But when she forgets her folder at home, she needs to think of a new way to celebrate their inner sparkle! This celebration of friendship and creativity by the bestselling mother-daughter team is the perfect gift for any special Valentine.

Praise For The Very Fairy Princess: Valentines from the Heart…

Praise for The Very Fairy Princess series:
"Three cheers for this princess whose magic comes from her confidence and determination rather than gauzy wings or shiny baubles." - Kirkus
"[Geraldine] lets kids know it's not necessary to be prim and proper to be a 'real' princess; princesses who just want to have fun will find plenty of that here." - Booklist
"The mother-daughter team successfully demonstrates an understanding of that magical stage of childhood in which determination, desire and dreams can transform reality." - Kirkus
"Geraldine radiates noblesse oblige, heedless energy, and a sense of destiny-she's Eloise crossed with Hillary Clinton." - PW
"Readers will cheer this princess's gumption and almost unfailing optimism... Kids are sure to applaud this encore performance." - Kirkus, starred review

Emma Walton Hamilton is an award-winning writer, producer and arts educator. Together with her mother, Julie Andrews, she has written over thirty books for children and young adults. Emma is on the faculty of Stony Brook University's MFA in Creative Writing, where she serves as director of the Children's Lit Fellows and the Young Artists and Writers Project.
or support indie stores by buying on