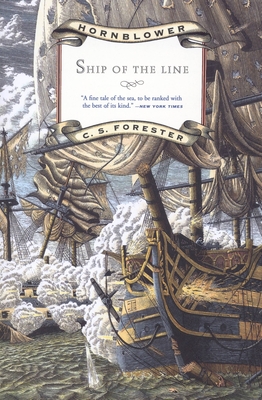 Ship of the Line (Paperback)

Hornblower leads his first ship of the line into enemy waters in this installment of C. S. Forester's beloved adventure series, called "exciting, realistic, packed with grand naval action" by the New Yorker.
May 1810, seventeen years deep into the Napoleonic Wars. Captain Horatio Hornblower is newly in command of his first ship of the line, the seventy-four-gun HMS Sutherland, which he deems "the ugliest and least desirable two-decker in the Navy List." Moreover, she is 250 men short of a full crew, so Hornblower must enlist and train "poachers, bigamists, sheepstealers," and other landlubbers.
By the time the Sutherland reaches the blockaded Catalonian coast of Spain, the crew is capable of staging five astonishing solo raids against the French. But the grisly prospect of defeat and capture looms for both captain and crew as the Sutherland single-handedly takes on four French ships.
"A fine sea tale, to be ranked with the best of its kind." --New York Times

Praise For Ship of the Line…

"Ship of the Line contains such lucid explanations of naval maneuvers that before they have finished its readers may feel they could sail a frigate themselves."—Time
or support indie stores by buying on
(This book is on backorder)
Copyright © 2020 American Booksellers Association