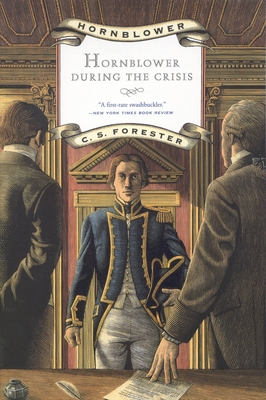 Hornblower During the Crisis

The final, unfinished volume in C. S. Forester's beloved Hornblower saga sees the indomitable naval hero engage in espionage to thwart Napoleon's forces ahead of the Battle of Trafalgar.
Although unfinished at the time of C. S. Forester's death, Hornblower During the Crisis delivers a full measure of action at sea, the hallmark of this incomparably exciting series of historical adventures.
On the threshold of securing his first post as captain, Hornblower finds himself forced by the exigencies of war to fight alongside a man whom he has unintentionally helped to court-martial. And for the first time Hornblower assents to engaging in espionage in his efforts to bring victory and glory to England in the Napoleonic Wars.
This extant fragment of Forester's final Hornblower novel is followed by the author's notes regarding the novel's conclusion. Also included in this volume are two stories -- "Hornblower's Temptation" and "The Last Encounter" -- that depict the great sea dog Hornblower in his youth and old age, respectively.

Praise For Hornblower During the Crisis…

"Hornblower has made his way into the public heart as few fictional heroes have ever done."
—San Francisco Chronicle