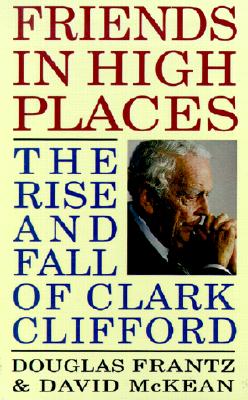 The Rise and Fall of Clark Clifford

For more than forty years, Clark Clifford was Washington's consummate Democratic power broker - attorney and adviser to the nation's most influential leaders. His 1991 memoir, Counsel to the President, looked back on a remarkable career of public service. But the very year his autobiography was published, the Clifford legend began to crumble. Caught up in the scandal that destroyed the Bank of Credit and Commerce International, the eighty-five-year-old Clifford was arrested on charges relating to his law firm's involvement with the outlaw bank. Though his case never went to trial, and his protege, Robert Altman, was found not guilty, Clifford's reputation was in ruins. How could such a man come to such an end? What happened? And why? In Friends in High Places, a noted investigative reporter and a chief investigator in the Senate inquiry on BCCI provide the answers. Drawing on original documents, more than a hundred interviews with Clifford's friends and adversaries, and fifty hours of interviews with Clifford himself, the authors reveal the drive and shrewdness that led Clifford to the pinnacle of power - and demonstrate convincingly that his involvement with BCCI was no aberration, but the bitter fruit of seeds planted at the beginning.