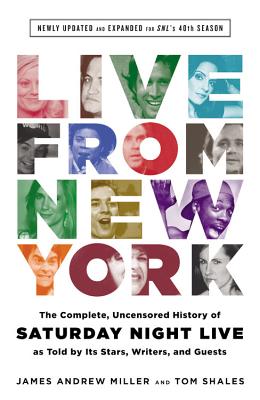 The Complete, Uncensored History of Saturday Night Live as Told by Its Stars, Writers, and Guests

When first published to celebrate the 30th anniversary of Saturday Night Live, Live from New York was immediately proclaimed the best book ever produced on the landmark and legendary late-night show. In their own words, unfiltered and uncensored, a dazzling galaxy of trail-blazing talents recalled three turbulent decades of on-camera antics and off-camera escapades.

Now decades have passed, and bestselling authors James Andrew Miller and Tom Shales have returned to Studio 8H. Over more than 100 pages of new material, they raucously and revealingly take the SNL story up to the present, adding a constellation of iconic new stars, surprises, and controversies.

Praise For Live From New York: The Complete, Uncensored History of Saturday Night Live as Told by Its Stars, Writers, and Guests…

"A guilty pleasure of the highest order....Live From New York shines."—Lev Grossman, Time

"A sharp-clawed, incisive account of how nearly three decades' worth of comic talent has emerged from a single television show."—Janet Maslin, New York Times

"Refreshing....Shales and Miller paint a detailed landscape portrait of what has become an American cultural icon, one that will guide any attentive reader to a fuller understanding of comedy, TV, and the culture itself."—Steve Johnson, Chicago Tribune

"The definitive history of SNL."—People

"As comprehensive [a] behind-the-scenes look of the iconic NBC show as you'll ever find.... If you're even a casual fan of Saturday Night Live, there's some nugget of information you'll appreciate within the book's pages.'"—Kelly Konrad, ChicagoNow

"Live From New York is the most complete history of Saturday Night Live, and the 40th anniversary edition is bigger and even better than the acclaimed original, adding a new constellation of stars and controversies."—Alan Petrucelli, Examiner

"Adding a constellation of stars, controversies, and surprises, this edition is even better than the original. The authors assemble and celebrate what has made SNL a beloved series: the manic energy, breakneck pace, outrageous personalities, backstage rivalries, and the sketches that kill."—Daniel Solzman, Flicksided

"A dream journal of epic proportions. This is what lifelong fans had been clamoring for: an oral history of its birth and reception, production and creative process, and celebrity and political machinery, as told by the people who were there.... If you've devoured either of the previous editions, you'll exult about more than 200 new pages.... It is as compelling to loyalists, reminiscent to occasional viewers, and educational to show novices as any book about this institution is likely to attract."—Ben Siegel, Buffalo News

"An extensive update of the 2002 best-seller."—Lisa de Moraes, Deadline

"Pulls back the curtain on the last 12 years of Saturday Night Live."—NPR

"What Hollywood is reading."—Mike Allen, Politico

James Andrew Miller has worked in virtually all aspects of journalism -- as well as on the entertainment side of television production and development -- for more than twenty years. Along with Tom Shales, he is the author of the #1 bestseller Those Guys Have All the Fun: Inside the World of ESPN.

Tom Shales is America's foremost television critic, having won the Pulitzer Prize for Criticism in 1988. For twenty-five years, he was film critic for National Public Radio.
Loading...
or
Not Currently Available for Direct Purchase