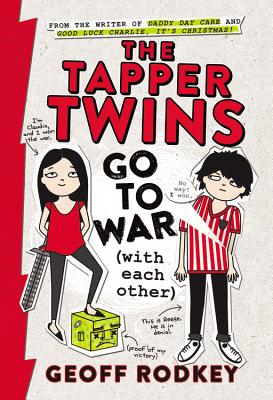 The Tapper Twins Go to War (With Each Other)

Praise For The Tapper Twins Go to War (With Each Other)…

Praise for The Tapper Twins Go to War (With Each Other):
A 2015 NYPL 100 Titles for Reading and Sharing Book


*"This uproarious series opener... is packed with both laugh-out-loud moments and heart."

*"Sibling rivalry is alive and well in this story.... [it] will cause readers to reflect on the highs and lows of everyday life."—School Library Connection, starred review

"Geoff Rodkey... has his pacing down to a science.... The voices of the two characters telling the story are absolutely pitch-perfect.... Kids are going to gobble up this new series."—San Francisco Book Review

"Thanks to the inclusion of various points of view, Claudia's reasonably balanced narrative offers plenty of humorous insight, and occasional doodles and photos keep it peppy."—Booklist

"An authentic and funny look at sibling rivalry."—VOYA

Geoff Rodkey is an Emmy-nominated screenwriter who has written the hit films Daddy Day Care, RV, The Shaggy Dog, and the Disney Channel original TV movie Good Luck Charlie, It's Christmas. He is also the author of The Tapper Twins Go to War (With Each Other), The Tapper Twins Tear Up New York, and The Tapper Twins Run for President, as well as the middle grade trilogy The Chronicles of Egg. He lives in New York City.
or
Not Currently Available for Direct Purchase