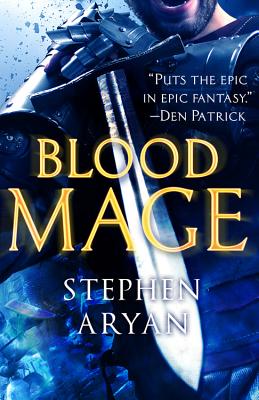 The people of Perizzi have survived the battlemage war, but their future is looking darker than ever.

BYRNE is a member of the Watch, investigating a series of murders in which the corpse was drained entirely of life.

FRAY's expertise with magic is needed to catch the killer, but working with the Watch destroyed his father, years before.

CHOSS is a champion fighter, trying to diffuse a war in the underworld that threatens to turn the streets red with rivers of blood.

KATJA is a spy from a foreign land, attempting to prevent a massacre that will topple two dynasties and destroy the fragile peace in the city for ever.

Watchmen and spies, assassins and criminals will clash on the streets in this magic-fuelled adventure from the author of Battlemage.

Praise For Bloodmage (Age of Darkness #2)…

"Stephen Aryan puts the epic into Epic Fantasy. This is a ground-shaking debut, full of fiery promise."—DenPatrick, author of The Boy with the Porcelain Blade on Battlemage

"A vivid and rousing adventure with the kind of magic that punches you right in the face."
—JenWilliams, author of The Copper Promise on Battlemage

"Aryan's battle scenes are visceral masterpieces that transport the reader deep into the melee. Read. This. Book."
—TaranMatharu, author of the Summoner series on Battlemage