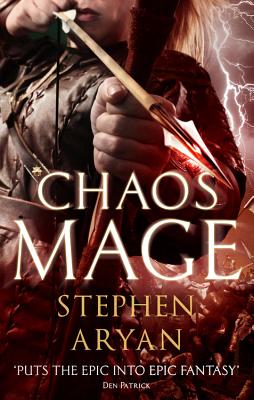 Voechenka is a city under siege. Decimated by the Battlemage War, its dead now walk the city at night, attacking survivors, calling their names and begging the living to join them beyond the grave.

Tammy is a watchman sent to the city to investigate, so the ruling powers can decide whether to help Voechenka or leave it to its grisly fate.

Zannah is a pariah in Voechenka -- making up for her people's war crimes by protecting refugees who fear her far more than they fear their unearthly attackers.

Balfruss is a scholar, a traveler . . . and the infamous mage who single-handedly ended the war.

No one else may enter or leave the city -- so if this ragtag group of survivors can't figure out what is going on, they'll live out their last few, short days within its walls.
And night is coming on fast . . .

Praise For Chaosmage (Age of Darkness #3)…

"Stephen Aryan puts the epic into Epic Fantasy. This is a ground-shaking debut, full of fiery promise"—Den Patrick, author of The Boy with the Porcelain Blade on Battlemage

"A vivid and rousing adventure with the kind of magic that punches you right in the face"—Jenn Williams, author of The Copper Promise on Battlemage

"Aryan's battle scenes are visceral masterpieces that transport the reader deep into the melee. Read. This. Book."
—Taran Matharu, author of the Summoner series on Battlemage