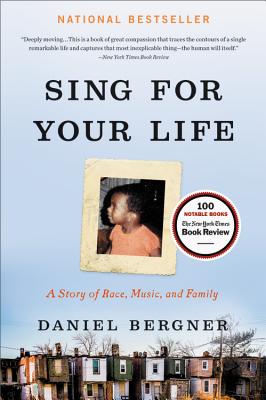 Sing for Your Life

The New York Times bestseller about a young black man's journey from violence and despair to the threshold of stardom: "A beautiful tribute to the power of good teachers" (Terry Gross, Fresh Air).

"One of the most inspiring stories I've come across in a long time."-Pamela Paul, New York Times Book Review

Ryan Speedo Green had a tough upbringing in southeastern Virginia: his family lived in a trailer park and later a bullet-riddled house across the street from drug dealers. His father was absent; his mother was volatile and abusive.

At the age of twelve, Ryan was sent to Virginia's juvenile facility of last resort. He was placed in solitary confinement. He was uncontrollable, uncontainable, with little hope for the future.

In 2011, at the age of twenty-four, Ryan won a nationwide competition hosted by New York's Metropolitan Opera, beating out 1,200 other talented singers. Today, he is a rising star performing major roles at the Met and Europe's most prestigious opera houses.

Sing for Your Life chronicles Ryan's suspenseful, racially charged and artistically intricate journey from solitary confinement to stardom. Daniel Bergner takes readers on Ryan's path toward redemption, introducing us to a cast of memorable characters -- including the two teachers from his childhood who redirect his rage into music, and his long-lost father who finally reappears to hear Ryan sing. Bergner illuminates all that it takes -- technically, creatively -- to find and foster the beauty of the human voice. And Sing for Your Life sheds unique light on the enduring and complex realities of race in America.

Praise For Sing for Your Life: A Story of Race, Music, and Family…

"Deeply moving.... A testament to the limitlessness of the human spirit, even in the most forlorn and unexpected places.... This is a book of great compassion that traces the contours of a single remarkable life. But Bergner is also doing something more expansive, examining the long and tormented history of black involvement in an elite artistic tradition and in society at large. Ultimately, this is the story that captures the most inexplicable thing--the human will itself."--New York Times Book Review

"Written with filmlike immediacy.... This book is so good.... And the key element--highlighted by the book's subtitle 'A Story of Race, Music, and Family'--is Bergner's tackling of issues of race. With sensitivity and candor, he shows the subtle and not-so-subtle challenges the opera world poses to singers of color.... [A] vital, compelling and highly recommended book."--Washington Post

"SING FOR YOUR LIFE is about the hard legacy of history and family, and its transcendence through art. This book is Daniel Bergner's masterpiece and puts him at the top of American literary journalism."—George Packer, National Book Award-winning author of The Assassins' Gate and The Unwinding

"Sing For Your Life is certain to be billed as a book about race. And it is that, and also a book about art and hope and resilience. But this is not a book about abstractions. It's a story that is suspenseful in the deepest sense, and very moving - a story about a fascinating human being. I am grateful to Mr. Bergner for having introduced me to him."—-Tracy Kidder, Pulitzer Prize-winning author of The Soul of a New Machine and Mountains Beyond Mountains

"Sing for Your Life is a generous book, filled with complicated, compassionate characters, written with great journalistic skill but also empathy. The passages on opera read like superb sports writing. The passages on family illuminate the deeper reaches of identity, race, judgment -- and love. To read the story of Ryan Speedo Green is to be troubled, confused, heartbroken, thrilled, hopeful, proud, and ultimately, perhaps, changed."—Jeff Hobbs, author of New York Times bestseller The Short and Tragic Life of Robert Peace

"Daniel Bergner writes from the heart. Night after night, I stayed up late reading, entranced by this tender, unflinchingly honest, beautifully told story. Ryan Speedo Green. His voice, his journey, his exuberance will stay with me."—Alex Kotlowitz, author of National Bestseller There Are No Children Here

"A masterly crafted and unique portrait...While fans of opera will find this to be a captivating biography of one of the most decorated bass baritones, this highly recommended narrative is also about a man who conquers his personal demons and limitations to break racial barriers in one of the oldest cultural institutions in the world."—Library Journal (starred review)

"A thrilling and authentic work of art, this is the unlikeliest of portraits of an artist who against-all-odds rises from the ashes of rural black poverty, a broken home, child abuse and the edges of madness to vault to the threshold of opera stardom."
—Peter Gelb, General Manager, Metropolitan Opera

"In Sing For Your Life, Daniel Bergner beautifully tells the story of what it means for a young man to, quite literally, find his voice. In this chronicle of the life of Ryan Speedo Green, we see how a young black man can rise, and hold onto hope, despite all the forces working against him. We see how a young black man can sing for his life and find triumph in the most unexpected of places."
—Roxane Gay, author of the New York Times bestselling Bad Feminist and An Untamed State

"Gripping and inspiring...Bergner chronicles the auditions and vocal contests as the struggles Green faces as a black man entering a musical world that is mostly white, delivering a moving portrait of a young man who succeeds, along with the help of encouraging teachers."
—Publishers Weekly, starred review

"In Ryan Speedo Green we see a microcosm of American's own struggle to throw off the shackles of our troubled racial legacy... His story, expertly told by Daniel Bergner, is proof of the possibility of all of our redemption."
—Joy-Ann Reid, National Correspondent for MSNBC and author of Fracture

"Sing for Your Life is absolutely riveting. Any rise to stardom in the daunting world of opera is bound to be dramatic, but Ryan Speedo Green's story is harrowing and rewarding in unexpected ways. From the first line, Daniel Bergner sets preconceptions about race, class, and "high" culture against a breathtakingly candid narrative of a young man's struggle, not just to conquer the Olympic challenges of singing opera, but also to see beyond violence and adversity to a life in music."
—Renée Fleming

"Bergner brings Green and [his] mentors to vivid, heroic life.... Bergner's inspirational biography has instant appeal, and, with the added attention to vocal techniques and rehearsals, readers with an interest in music will be especially rewarded."
—Booklist

"Bergner richly weaves Green's rising stardom with scenes from a daunting childhood.... In less skilled hands, Sing For Your Life might mimic a cliched rag-to-riches fable.... Instead, Bergner presents a far more nuanced and rigorous examination of the institutional forces that shape Green's life.... It's Green's sense of pride, of his connection to his history, to his heritage, that Bergner so delicately captures in this melodious narrative for which we, the readers, hang on every word."
—Atlanta Journal-Constitution

"Prepare for a feast.... A study in discipline and artistry, musical agility, opera itself and the role that race has played in all of it, this would be an enlightening read even without Green. His story makes it unforgettable."
—Bookpage

"Bergner pieces together this remarkable life with an impeccable knack for storytelling.... Sing For Your Life is a first-rate biography of a beaten-down young man who rode the opera train all the way to Lincoln Center."
—Shelf Awareness

"Sing for Your Life is a study in voice: part technical account of the vocal instrument, part celebration of its mysterious capacity to move us through song.... [The book] deserves praise, maybe even a year-end reward. It has so many of the qualities that critics and readers admire: a sympathetic hero whose life sketches an arc from tragedy to triumph; a treasured glimpse behind the high-culture curtain."
—Washington Post opinion section

"A first-rate psychological thriller.... Bergner cross-cuts between Green's violent, impoverished childhood and his ascendance onto the global opera stage. The result is a stirring prelude to a career dangling on the edge of greatness, as well as a courageous exploration of nature and nurture rarely addressed in cautious industry discussions on diversity."
—Opera News

Daniel Bergner is a contributing writer for the New York Times Magazine and the author of a novel, Moments of Favor, and four books of nonfiction: What Do Women Want?, The Other Side of Desire, In the Land of the Magic Soldiers, and God of the Rodeo. In the Land of Magic Soldiers received an Overseas Press Club Award for international reporting and a Lettre-Ulysses Award for the Art of Reportage and was named a Los Angeles Times Best Book of the Year. God of the Rodeo was a New York Times Notable Book of the Year. In addition to the New York Times Magazine, Daniel's writing has appeared in the Atlantic, Granta, Harper's, Mother Jones, Talk, and the New York Times Book Review, and on the op-ed page of the New York Times. His writing is included in The Norton Reader: An Anthology of Nonfiction.
Loading...
or support indie stores by buying on