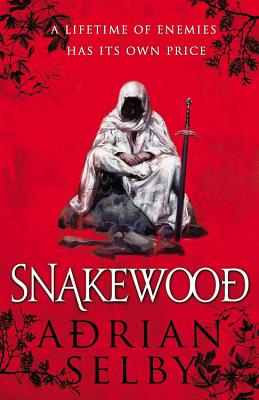 An epic fantasy like no other, Adrian Selby's debut takes an unblinking look at the price we pay for our pasts, the art of war and the people who make it their business. Enter a violent world of revenge and bloody combat with characters you'll never forget.

They called them Kailen's Twenty, a legendary band of ruthless mercenaries who gave no quarter. Living only by the code of steel, blood and coin, and aided by fightbrews that gave them the edge in battle, whoever met their price won.

Now, broken up and seemingly forgotten, they are being hunted down, one by one.

Drawn from multiple accounts compiled by a scholar investigating the legendary group's demise, who is also the son of one of the Twenty, Snakewood is fantasy at its most inventive and rewarding.

"Set in a brutal world of subtle magic, clashing empires, and commercial interests, this is an impressive fantasy debut. Selby demonstrates the command of style, character, plotting, and world building of a seasoned author."
—Booklist

"Not your typical grimdark fantasy....While it's a complex tale, this is also an immensely readable one, and should appeal to fans of the immersive world-building of Brandon Sanderson. Selby constructs his world on a personal, visceral level, making sure we feel everything that happens to the narrators."—BarnesandNoble.com

"I give it nothing but the highest recommendation."
—Grimdark Magazine

"Contemporary and grimdark as it comes."
—British Fantasy Society

"Wears its grimdark on its sleeve ... a thrilling tale of adventure, betrayal, triumph and loss."
—Interzone

"Grim mercenaries and badass alchemists brought to life by a bold, assured storyteller."
—Peter Newman, author of The Vagrant

"A lot to enjoy, especially if you are a fan of dark, gritty, old-soldier stories."
—Fantasy Faction

Adrian Selby studied creative writing at university before embarking on a career in video game production. He worked for several big-name studios as a producer, before settling down to more conventional work in IT project management. He is a Tolkien fanatic, and online gaming addict, and lives with his wife and family on the south coast of England.
Loading...
or
Not Currently Available for Direct Purchase