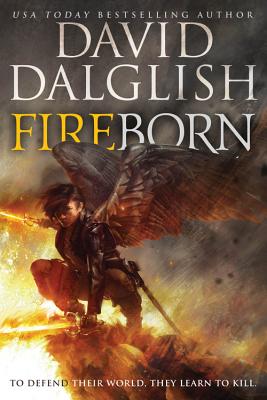 The next novel in the Seraphim series following Skyborn from USA Today bestselling author, David Dalglish.

Bree and Kael Skyborn have seen their island invaded, their Seraphim disbanded, and their royal family imprisoned.

A rebellion grows from the ashes, demanding Bree to be their Phoenix, their symbol against Center's tyranny, and for Kael to find the doomsday prophet Johan and sway his cult to their side.

Should they fail, the hope of their rebellion fails with them.

"A must-read for fans of Michael Sullivan and Brent Weeks."—Library Journal on Skyborn

"Once you pick up Skyborn you won't want to put it down...I expect this series to fly off the shelves."—Kelly McCullough

"A soaring tale that nails the high notes. Skyborn had me gazing heavenward, imagining what could be."—Jay Posey, author of Three, on Skyborn

"A high-flying, dynamic adventure [that] soars confidently and will appeal to teens and adult audiences alike."—Publishers Weekly (starred review) on Skyborn

"In this exciting middle installment of the Seraphim trilogy... [Daglish] reveals additional layers of complexity and wonder, as well as increasingly high stakes. There is a heavy focus on action-packed aerial combat, and chaos and conflict escalate with every page, but this fantastical futuristic epic doesn't skimp on plot development and character moments."
—Publishers Weekly on Fireborn

Dalglish's writing hits close to home, creating a world of uncertain political climate with dishonest characters and fantastical scenes of warfare. Fans of Skyborn aren't going to want to miss this strong follow-up.—Booklist on Fireborn

David Dalglish currently lives in rural Missouri with his wife Samantha, and daughters Morgan, Katherine, and Alyssa. He graduated from Missouri Southern State University in 2006 with a degree in Mathematics and currently spends his free time dying for the umpteenth time in Dark Souls.
Loading...
or
Not Currently Available for Direct Purchase