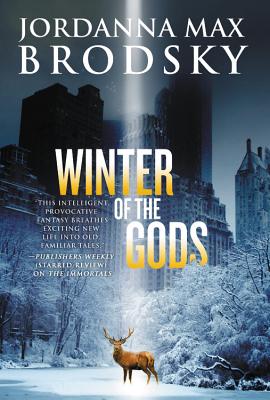 Winter of the Gods (Olympus Bound #2)

Praise For Winter of the Gods (Olympus Bound #2)…

"The Immortals is a lively re-imagining of classical mythology with an engaging premise, a page-turning plot, and an eye for the arresting and uncanny in contemporary urban life."—Deborah Harkness, New York Times bestselling author of A Discovery of Witches on The Immortals

"Imaginative
and fast-paced, The Immortals is pulse-pounding entertainment."—Kevin O'Brien, New York Times bestselling author of No One Needs to Know on The Immortals

"Brodsky's writing has claws...They sink in with the first word and don't let go until you are finished with the book."—Darynda Jones, New York Times bestselling author on The Immortals

"Irresistible...a page-turner that deftly weaves action, romance, and a dash of intellectual heft into one seamless whole."—Dustin Thomason, New York Times bestselling author on The Immortals

"Painstakingly researched, intellectually complex, and deeply rooted in the history and mythology of Ancient Greece, THE IMMORTALS is a richly imaginative, multi-layered tale that stimulates the heart and the mind in equal measure."—Ian Caldwell, New York Times bestselling author on The Immortals

Jordanna Max Brodsky hails from Virginia, where she made it through a science and technology high school by pretending it was a theater conservatory. She holds a degree in history and literature from Harvard University. She lives with her husband in Manhattan, where she is working on her next novel.
or support indie stores by buying on