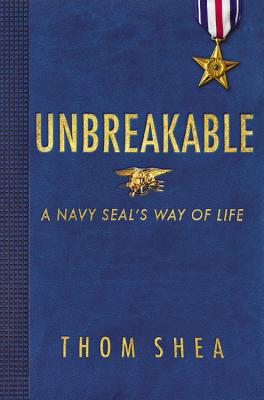 A Navy SEAL's Way of Life

A highly decorated Navy SEAL shares stories of his years of combat experience in Afghanistan, providing leadership insights that will shift your view of yourself and provoke life-altering change.

Before leaving for combat in Afghanistan, Navy SEAL Thom Shea promised his wife that he would write to his children in case he didn't make it back. What was initially intended to be a private memoir for his family turned into a powerful set of lessons for anyone striving to perform beyond what they believe possible.

Shea's stories, while action-packed and entertaining, provide incredible insights on leadership, family, and excellence. In Unbreakable, Shea teaches readers how to achieve and maintain a strong internal dialogue through no matter what the task. Read this book and transform your life.

Praise For Unbreakable: A Navy SEAL's Way of Life…

"Thom Shea's Unbreakable is an action-packed memoir intertwined with a powerful and unique set of lessons on how to lead a more productive life. As a highly decorated Navy SEAL, Shea has viewed life through an optic filled with the harsh realities and brutalities of war, hardship, pain, and death. Over the course of his career with the SEAL teams, he has developed what he calls an internal dialogue. Shea's brilliant writing style provides a very clear description of how utilizing an internal dialogue will provide the reader with a means to greater goal accomplishment and a means to live life at a much higher level of productivity."—Don Mann, bestselling author of Inside SEAL Team Six

"I'm a raving fan of Unbreakable. It not only is a powerful story of an amazing human being and his twenty-three years as a Navy SEAL, but it also provides a powerful self-development tool. Let Thom Shea teach you about internal dialogue--what you say to yourself about who you are--and how managing that dialogue can increase your goal achievement and effectiveness in life."—Ken Blanchard, coauthor of The One Minute Manager and Leading at a Higher Level

"Unbreakable is a treasure. Navy SEALs are Americans who lead us from the front. They are the best in the world. Thom Shea and his wife, Stacy, unveil insights into how they not only survived unimaginable challenges, but prospered. Their book is a riveting lesson from their hearts to their children and to all of us. Initially, people will want to read this book out of curiosity, but then they will be knocked out by its message that builds success in every category. Personally, I am so thankful for the Sheas' clear message for all Americans and our free-enterprise system."—Leighton M. Cubbage, chairman of Serrus Capital Partners

"Unbreakable is the raw inside story of what it is like to thrive and excel in the margin of war. The parallels are clear in the corporate world, especially for an entrepreneur. Internal dialogue does drive all human performance. If you want to learn what it is to succeed in the margin while maintaining balance with a wife or significant other and family, read Unbreakable."—Carl Stecker, CEO of Net Profit Advisors and Benefits in a Card

Thom Shea served 23 years with distinguished Valor as a Navy SEAL. During his military career he served in three wars, ultimately leading a team of Navy SEALs into Afghanistan in 2009 where he earned a Silver Star, Bronze Star with Valor, Army Commendation with Valor and his second Combat Action Medal.

Shea is also the CEO of Adamantine Alliance, a leadership and human performance coaching organization. He now resides in Greenville, South Carolina, with his wife Stacy and three children.
Loading...
or
Not Currently Available for Direct Purchase