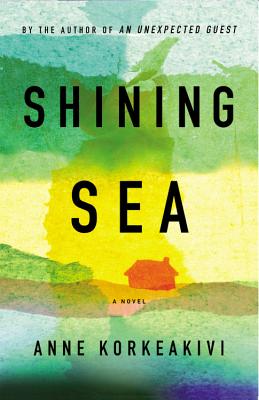 An arresting and absorbing novel that spans decades, drawing us into the turbulent lives of a family in Southern California after the sudden death of the father.

Beginning in 1962 with a shocking loss, Shining Sea quickly pulls us into the lives of forty-three -year-old Michael Gannon's widow and offspring. Brilliantly described and utterly alive on the page, the Gannon clan find themselves charting paths they never anticipated, for decades to come. Told with a cinematic sweep, Shining Sea transports us from World War II to the present day, crisscrossing from the beaches of Southern California to the Woodstock rock festival, from London's gritty nightlife in the eighties to Scotland's remote Inner Hebrides, from the dry heat of Arizona to the fertile farmland of Massachusetts.

Epic, tender, and beautifully rendered, Shining Sea is the portrait of an American family-a profound depiction of the ripple effects of war, the passing down of memory, the making of myth, and the power of the ideal of heroism to lead us astray but sometimes also to keep us afloat.

Anne Korkeakivi is the author of the novel An Unexpected Guest. Her short fiction and nonfiction have appeared in numerous publications in the United States and Britain, including The Yale Review and The Atlantic, and she is a Hawthornden Fellow. Born and raised in New York City, she has lived in France and Finland, and currently resides in Geneva, Switzerland, where her husband is a human rights lawyer with the United Nations. They have two daughters.

"This absorbing generational story...explores complex dynamics and captures the mood of different decades in America. Korkeakivi's cogent insight into family relationships and the impact of personal loss, as well as how the times we live in effect who we are, shines through.... Each character's story is rich and excellently crafted.... In the end, Korkeakivi seamlessly brings her themes full circle-heroism, the importance of family, and giving back to the world."—Publishers Weekly (starred review)

"[An] impressive story about how a family will band together and perhaps drift apart to live on."
—Sarah Bracy Penn, Harper's Bazaar


"An absolutely transcendent novel about great love and great loss, with a majestic sweep from WWII to Woodstock to modern times. About the memories that change-and save us-and the connections one extraordinary family breaks and remakes. So alive, the novel virtually breathes."—Caroline Leavitt, author of Is This Tomorrow and Pictures of You

"I tore through it. Shining Sea is a beautifully drawn testament to everyday heroism and to the power of the family to persevere in the face of tragedy and turbulent world events."—Charlotte Rogan, author of The Lifeboat

"I could tell you how in Shining Sea Anne Korkeakivi masterfully explores the impact grief, and war, have on a family. But I will just say this: I loved this book."—Ann Hood, author of Comfort: A Journey Through Grief and The Italian Wife

"When I finished reading Anne Korkeakivi's stirring second novel, Shining Sea, I had to double-check the page count--how could such a huge, multi-generational saga be told so skillfully in less than 300 pages? But Korkeakivi does so, and does it so well, never losing her grip on the reader's attention. The canvas is large, but so are the characters and, most importantly, Korkeakivi's talent which brings them to life. I really, really loved it."—David Abrams, author of Fobbit

"Shining Sea is a novel of clap-demanding authorial grace. Its drama is eloquent, its message resonant. The truly remarkable Anne Korkeakivi has written a laudable and relentless novel."—Chigozie Obioma, author of The Fishermen

"A panoramic novel tracing generations of the Gannon family illuminates the aftershocks of war in the 20th century.... The effortless prose and vining plot make for a winsome tale of kinship and growth. Endearing characters carry a sinuous story of family bonds."
—Kirkus Reviews


"A gut-wrenching story about war, family, and the persistence of memory, Shining Sea will take you all over the globe without so much as leaving your reading chair."—Sadie L. Trombetta, Bustle

"A meditation on family, the long shadow of war over generations, and myth-making."—The Millions

"With a far-reaching plot...and storytelling that couples pointed restraint with sweeping vision, Korkeakivi covers the not-so-shining moments of the late twentieth century. The result is a family saga that explores the lingering effects of war and the elusive emotions of peace."—Carol Haggas, Booklist

"An epic tale of resilience.... Korkeakivi's prose is clear, honest, and unadorned throughout. Excellent at crowd control, she deftly handles the curves and swirls of many characters over a long period of time. The big arcs of a life seem to fascinate Korkeakivi particularly, and she is at her most remarkable when flying high for the bird's eye view, then swooping straight down into her characters' hearts."—Lisa Alexander, The Common

"This elegantly crafted, brilliantly structured novel is an intimate epic that speaks volumes about the complexities of shared history, and the way we are all overshadowed by the ever-present past. Possessing immense intelligence and a deeply felt understanding of family as the ongoing struggle with which we all must engage, Shining Sea is a quiet, resonant wonder."—Douglas Kennedy, author of The Blue Hour and The Pursuit of Happiness

"If you haven't yet found your perfect beach and/or Labor Day read, fret not: Shining Sea is the family saga you want to read-with a message about war that won't leave you queasy from sweetness. Korkeakivi writes beautifully; gobble this one up and keep an eye out for her next."—Bethanne Patrick, Lit Hub

"It'll look good on your bookshelf, and it'll make you cry. It's a win-win."—Lydia Mansel, Elite Daily