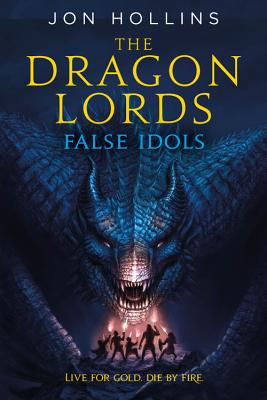 Guardians of the Galaxy meets TheHobbit in this rollicking fantasy adventure series.

The Dragons who once ruled over the land are dead.
The motley crew that stumbled through that revolution are rich and praised as saviors.

Everyone gets to live happily ever after, right?
Right?

Well, it might have worked out that way if the dragons in Kondorra had been the only ones. If they hadn't been just the tip of the spear about to fall upon the whole world. . .

"Madcap, dark, and bloody... Fans of humorous fantasy will enjoy the outrageous yet cunning plot twists of this comedy with an edge sharp enough to cut dragon scales."—Publishers Weekly (starred review)

"Humorous and profane, False Idols tackles the dynamics of power and corruption from uniquely unglamorous angles as the core group of characters struggles to remove humanity from the grip of all masters, whether monstrous or divine."—Booklist

"Hollins ladles on the humor while hardly skimping on the action, the unexpected plot swerves, or the glorious feels."—B&N on The Dragon Lords: Fool's Gold

"Hollins's seat-of-the-pants fantasy comedy snowballs wildly into a glorious disaster of fire, magic, multiple threats to people's intestines, and fun -- for the reader, if not the characters."
—Publishers Weekly (starred review) on The Dragon Lords: Fool's Gold

"Jon Hollins is a one of kind storyteller, a master of epic fun and nonstop action. Alas, since we both write humor-infused epic fantasy, this makes us natural enemies. Watch your back, Jon."—Nicholas Eames, author of Kings of the Wyld

Jon Hollins is a pseudonym.
Loading...
or
Not Currently Available for Direct Purchase