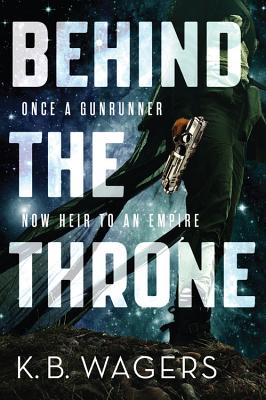 Behind the Throne (The Indranan War #1)

Behind the Throne begins K. B. Wagers's action-packed science fiction adventure, with a heroine as rebellious as Han Solo, as savvy as Leia, and as skilled as Rey.

Hail Bristol has made a name for herself as one of the most fearsome gunrunners in the galaxy. But she can't escape her past forever: twenty years ago, she was a runaway princess of the Indranan Empire. Now, her mother's people have finally come to bring her home.

But when Hail is dragged back to her Indrana to take her rightful place as the only remaining heir, she finds that trading her ship for a palace is her most dangerous move yet.

In a world where the only safe options are fight or flight, Hail must rule.

Praise For Behind the Throne (The Indranan War #1)…

"Full of fast-paced action and brutal palace intrigue, starring the fiercest princess this side of Westeros."—B&N.com

"A darn good space adventure yarn. It takes the best of the smugglers' corner of the Star Wars universe and adds political intrigue and family drama."—Tor.com

"Promising science-fiction series ... for fans of stories with plenty of action and political maneuvering."—Booklist

"Behind the Throne opens with a bang and maintains the momentum throughout the story."—RT Book Reviews

"The start of a damn good series. Rich world building, great characters, and an enthralling story make for a page turner."—Pop Culture Beast

K.B. Wagers is the author of the Indranan & Farian War trilogies with Orbit Books and the NeoG novels from Harper Voyager. They hold a bachelor's degree in Russian Studies and a second-degree blackbelt in Shaolin Kung Fu. A native of Colorado, K.B. lives at the base of the Rocky Mountains with their partner and a crew of recalcitrant cats. In between books, they can be found attempting to learn Spanish, dying in video games, dancing to music, and scribbling new ideas in their bullet journal.
Loading...
or support indie stores by buying on