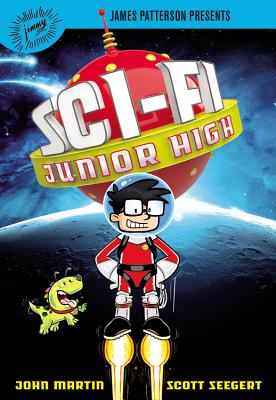 This gleefully illustrated space adventure is a laugh on every page. That's a lot of laughs!

Kelvin Klosmo isn't just the new kid at school -- he's the new kid in the galaxy! Welcome to Sci-Fi Junior High: an inter-galactic space station with students of all shapes, sizes, smells, and . . . slime content.

As the son of Earth's two most famous geniuses, Kelvin isn't just the smartest kid in the world . . . he's the smartest kid in the Universe. At least, that's what everybody at Sci-Fi Junior High thinks. So, maybe Kelvin lied a little about being a genius to fit in. And maybe a mad scientist is about to take over the universe unless Kelvin can stop him. Maybe everyone is doomed.

Well, at least Kelvin won't have to worry about math homework anymore. Sci-Fi Junior High is an out-of-this-world story about friendship, accepting our differences, and the fight against evil . . . bunnies. Yes, evil bunnies -- don't ask.

"Easily digestible segments, [and] sheaves of cartoons...are interspersed throughout the text, boosting the comedic action into even higher orbit. A crowd pleaser."
—Booklist

"It's a classic trope executed so funnily that it manages to seem fresh. Amusing black and white illustrations pepper the text. There's plenty here to warrant another outing with Kelvin in a sequel."—Center for Children's Books

"SCI-FI JUNIOR HIGH is packed with not just galactic-scale laughs, but also genuine middle-school appeal. Saving the universe has never been so much fun!"—Gordon Korman, #1 New York Times bestselling author of Masterminds, Swindle and The 39 Clues

"The Final Frontier of funny! Attention all librarians: order extra copies of Sci-Fi Junior High as the waiting list will be long, persistent and potentially riotous. The funny is strong with this one."
—Jake Marcionette, New York Times bestselling author of the Just Jake series

"A sci-fi book for young readers... exciting and interesting enough to hold their attention."—Library Connection

Scott Seegert is the author of the Vordak the Incomprehensible series. He lives in Farmington, MI with his wife, Margie, and their three children.

John Martin is an illustrator, graphic artist, and website designer. He is the illustrator for the Vordak the Incomprehensible series. He lives in Farmington Hills, MI, with his wife, Mary, and their three children.
Loading...
or
Not Currently Available for Direct Purchase