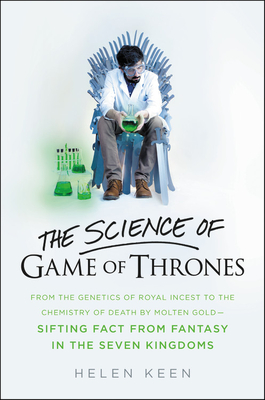 The Science of Game of Thrones (Hardcover)

A myth-busting, jaw-dropping, fun-filled tour through the science of your favorite fantastical world.

Award-winning comedian and popular-science writer Helen Keen uncovers the astounding science behind the mystical, blood-soaked world of Game of Thrones, answering questions like: Is it possible to crush a person's head with your bare hands? What really happens when royal families interbreed? Does Cersei have Borderline Personality Disorder? What curious medical disorder does Hodor suffer from? And more.

Join Keen as she investigates wildfire, ice walls, face transplants, and every wild feature of Westeros and beyond, revealing a magical world that may be closer to our own than we think. The Science of Game of Thrones is the ultimate guide to the epic series as well as the perfect gift for science-lovers and fans. So pour yourself a bowl of brown, climb on your beast of burden, and prepare yourself to see the Seven Kingdoms as you have never seen them before.

Helen Keen is an award-winning comedy writer and performer. Her first solo stand up show, It Is Rocket Science was picked up by BBC Radio 4, won the 2013 WISE Media Award and was shortlisted for the 2014 Writers' Guild Award for Best Radio Comedy.

Praise For The Science of Game of Thrones: From the genetics of royal incest to the chemistry of death by molten gold - sifting fact from fantasy in the Seven Kingdoms…

"The Science of Game of Thrones is required reading for anyone harboring a mote of curiosity about how magic manifests in our world in the guise of amazing real-life creatures and phenomena. It's also a great gift for the adorable know-it-alls in our lives who would love nothing more than to impress friends and woo the ladies by reciting the engineering calculation that explains how a baby dragon could immolate a grown man."—Salon

"A breezy, funny, but thoroughly researched survey of the fantastic wonders on 'Game of Thrones' . . . covers topics ranging from the sexual biology of dragons to how trees talk to each other and their environment."—Wall Street Journal

"You could call it the mad scientist's guide to Westeros . . . a humorous look back at English medieval discoveries that make their way into the popular fantasy HBO series and books. Perfect for 'GoT'' fans looking to pass the time until the next season."—The New York Post
or support indie stores by buying on
Copyright © 2020 American Booksellers Association