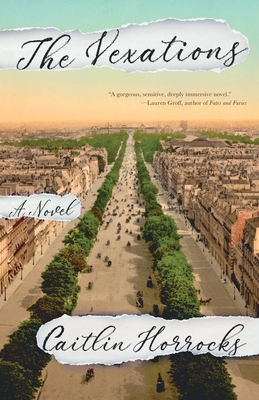 "Marvelous . . . Was
[Erik Satie] a prophet or a prankster? To its credit, Ms. Horrocks's novel
doesn't venture an answer. Instead, it wonderfully embellishes the world
through which Satie wandered like some kind of marooned alien visitor."—Sam Sacks, Wall Street Journal

"A heartbreakingly beautiful novel about the
sacrifices people make for what they hold dear."—Library Journal (starred review)

"A finally wrought, sensitive novel about family and
genius, and the toll that genius exacts on family in pursuit of great art."—The Millions

"Horrocks paints an atmospheric portrait of bohemian Paris and a poignant one of Satie and his avant-garde circle, who "lived in the yet: not now, but soon" when their art would be recognized...Finely written and deeply empathetic, a powerful portrait of artistic commitment and emotional frustration."—Kirkus Reviews

"Horrocks shines while envisioning Erik scoring a silent film, debuting a masterpiece, or being released from jail (where he was held for defaming a reviewer) so he can complete a commission. Horrocks's description of Satie's music is also apt for her noteworthy novel: slow, spare, and at its best finely filigreed."—Publishers Weekly

Praise for THIS IS NOT YOUR CITY:
"Wildly entertaining... These are delicate, character-driven stories whose distinct narrators demonstrate the hand of a remarkably versatile writer...Caitlin Horrocks is writing well beyond her years, not only raising our expectations of what a story can do but also setting a high standard for any debut fiction author."—Wayne Harrison, San Francisco Chronicle

"Startlingly ingenious writing...Many of the stories have a note of what could be called sprightly heartbreak...Horrocks's is a formidably promising imagination."—Richard Eder, Boston Globe

"Impressively sharp...Appealingly rugged-hearted...Though diverse in style and point of view, Horrock's stories share one consuming fixation. We live in a world studded with cruelty...But she deploys love and humor as convincingly as dread."—Robin Romm, New York Times

Caitlin Horrocks is the author of the story collection This Is Not Your City and a recipient of the O. Henry Prize, the Pushcart Prize, and the Plimpton Prize. Her fiction has appeared in the New Yorker, the Atlantic, the Paris Review, Tin House, One Story, and elsewhere and has been included in The Best American Short Stories. She lives with her family in Grand Rapids, Michigan.
Loading...
or support indie stores by buying on