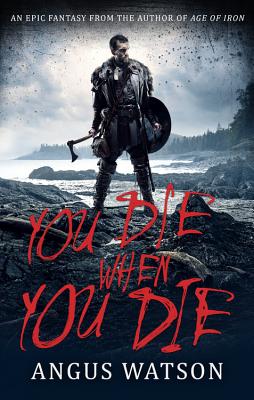 You Die When You Die (West of West)

You can't change your fate -- so throw yourself into battle, because you'll either win or wake up drinking mead in the halls of your ancestors. That's what Finn's people believe.

But Finn wants to live. When his settlement is massacred by a hostile nation, Finn plus several friends and rivals must make their escape across a brutal, unfamiliar landscape, and to survive, Finn will fight harder than he's ever fought before.

The David Gemmell Award-nominated author of Age of Iron returns with You Die When You Die -- an epic fantasy adventure in which a mismatched group of refugees battle animals and monsters, determined assassins, an unforgiving land and each other as they cross a continent to fulfil a prophecy.

"I loved every second of it . . . More please, as soon as is humanly possible!." -- The Eloquent Page

"A rip-roaring, swiftly paced adventure set in a sprawling and beautifully detailed world . . . sure to win the devotion of plenty of fans." -- RT Book Reviews

"The first book in Watson's new fantasy trilogy is raw, violent, and gritty . . . You Die When You Dieblurs the lines between hero and villain into who lives and who dies. He who survives another day wins for the moment; tomorrow might be another story." -- Booklist

Praise For You Die When You Die (West of West)…

"In this bloody, brutal historical fantasy, Watson kicks off a trilogy inspired by the Vikings' settling North America a millennium ago, albeit with a magical twist."—Publishers Weekly

"Unflinchingly bloodthirsty and outrageously entertaining."—Christopher Brookmyre on Age of Iron

"It simply grabbed me by the throat and wouldn't let go."—Bibliosanctum on Age of Iron (5 stars)

"Would I read the next one? Yes, absolutely. Bring me my hammer, bring my beer, bring it on!"—SF Crowsnest on Age of Iron

"A fun and addictive read."—Fantasy Faction on Age of Iron