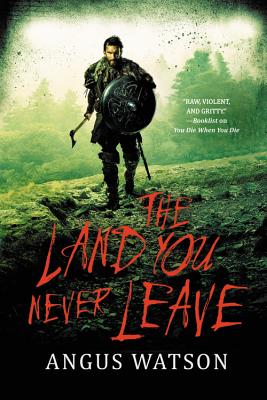 The Land You Never Leave (West of West #2)

The David Gemmell Award-shortlisted author of Age of Iron returns with the second book in his epic West of West trilogy, in which a mismatched group of refugees must battle animals and monsters, an unforgiving land and each other as they cross a continent to fulfill a prophecy.

Welcome to the Badlands. . .

Newly and uneasily allied, two tribes from different worlds set off across the Ocean of Grass. Their mission is to fulfill a prophecy and take Ottar the Moaner west of west, to save mankind.

In their way are the denizens of the Badlands, the most terrifying and powerful collection of murderers and monsters the world has ever seen.

Praise For The Land You Never Leave (West of West #2)…

"This is a bloody good epic for fans of Kings of the Wyld, with a colorful cast of characters and prose studded with delightfully dark gallows humor."—B&N Sci Fi and Fantasy Blog

"In this bloody, brutal historical fantasy, Watson kicks off a trilogy inspired by the Vikings' settling North America a millennium ago, albeit with a magical twist."—Publishers Weekly on You Die When You Die

"Raw, violent, and gritty."—Booklist on You Die When You Die

"A rip-roaring, swiftly paced adventure set in a sprawling and beautifully detailed world."—RT Book Reviews on You Die When You Die

"Hugely entertaining."—SFX on You Die When You Die

"Unflinchingly bloodthirsty and outrageously entertaining."—Christopher Brookmyre on Age of Iron

"It simply grabbed me by the throat and wouldn't let go."—Bibliosanctum on Age of Iron (5 stars)

"Would I read the next one? Yes, absolutely. Bring me my hammer, bring my beer, bring it on!"—SF Crowsnest on Age of Iron

"A fun and addictive read."—Fantasy Faction on Age of Iron

Angus Watson is an author and journalist living in London. He's written hundreds of features for many newspapers including the Times, Financial Times, and the Telegraph, and the latter even sent him to look for Bigfoot. As a fan of both historical fiction and epic fantasy, Angus came up with the idea of writing a fantasy set in the Iron Age when exploring British hillforts for the Telegraph, and developed the story while walking Britain's ancient paths for further articles.
Loading...
or
Not Currently Available for Direct Purchase