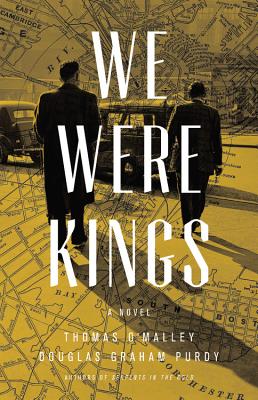 We Were Kings (The Boston Saga #2)

In 1950's Boston, the Irish Republican Army is running guns and killing witnesses. Cal and Dante are committed to stopping them.

When a body is discovered at the Charlestown locks -- tarred, feathered and shot to death -- it appears to be a gangland killing, and is almost immediately dismissed. However, Cal O'Brien's cousin, Boston PD detective Owen Lackey, recognizes the murder style as the typical retribution for IRA informers. Combined with a tip-off about a boat coming into Boston weighed down with stolen guns and ammunition, the body in the locks hints that much more may be at stake than a one-off hit.

Serpents in the Cold introduced us to Cal and Dante, whose previous investigation brought them to the highest ranks of Boston's political elite. This time, Cal and Dante descend into the city's shadowy underbelly -- a world of packed dance halls, Irish wakes, and funeral parlors. There they discover a terrorist plot that will shake the city to its core and bring them head-to-head not only with Cal's past, but with the IRA Army Council itself.

Praise For We Were Kings (The Boston Saga #2)…

"This brilliant second entry in the Boston Saga sizzles . . . This stunning narrative will enrapture fans of James Crumley and the astonishingly deep and dark Sara Gran."—Booklist (starred review)

"The authors deliver noir done well in dark-city descriptions and a cast of damaged characters."—Kirkus Reviews

PRAISE FOR SERPENTS IN THE COLD:
"In the best noir tradition, these co-authors shine a smoky light on lives often lived in the shadows."—Carol Iaciofano, WBUR

"Like Sara Gran's Dope, Serpents in the Cold lovingly revisits the hardboiled noir. From the dives of Dorchester to the Locke-Ober Café, John Garfield and Richard Widmark would feel right at home in O'Malley and Purdy's bygone, fallen Boston."—Stewart O'Nan, author of West of Sunset

Thomas O'Malley is a graduate of the University of Massachusetts, Boston, and the Iowa Writers' Workshop, and currently teaches on the faculty of creative writing at Dartmouth College. He lives in the Boston area.
Loading...
or
Not Currently Available for Direct Purchase