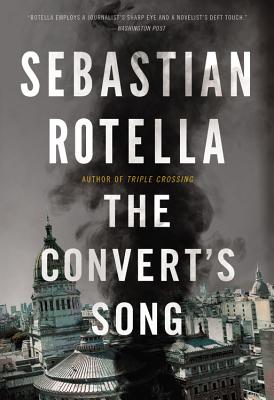 A global manhunt sweeps up a former federal agent when his childhood friend becomes the chief suspect in a terrorist rampage.

His hazardous stint in U.S. law enforcement behind him, Valentine Pescatore has started over as a private investigator in Buenos Aires. Then he runs into a long-lost friend: Raymond Mercer, a charismatic, troubled singer who has converted to Islam. After a terrorist attack kills hundreds, suspicion falls on Raymond -- and Pescatore.

Angry and bewildered, Pescatore joins forces with Fatima Belhaj, an alluring French agent. They pursue the enigmatic Raymond into a global labyrinth of intrigue. Is he a terrorist, a gangster, a spy? Is his loyalty to Pescatore genuine, or just another lethal scam? From the jungles of South America to the streets of Paris to the battlegrounds of Baghdad, The Convert's Song leads Pescatore on a race to stop a high-stakes campaign of terror.

Sebastian Rotella is the author of The Convert's Song and Triple Crossing, which the New York Times Book Review named its favorite debut crime novel of 2011, as well as the nonfiction book Twilight on the Line. He is a senior reporter covering international security issues for ProPublica, a newsroom dedicated to investigative journalism in the public interest.

He worked for twenty-three years for the Los Angeles Times, serving as bureau chief in Paris and Buenos Aires. His honors include a Peabody Award; Columbia University's Dart Award and Moors Cabot Prize for Latin American coverage; the German Marshall Fund's Weitz Prize for reporting in Europe; five Overseas Press Club Awards; The Urbino Prize of Italy, and an Emmy nomination. He was a Pulitzer finalist for international reporting in 2006.

Praise For The Convert's Song: A Novel…

"I read like a zealot, following Valentine as fast as I could into the thick of Argentina's criminal justice system and into the thicket of international terror. . . . The story got me in a chokehold as the characters grew more and more complex and Rotella's style thickened and boiled and bubbled."
—Alan Cheuse, NPR

"Excellent . . . Rotella ratchets up the action with an absorbing look at international politics."
—Publishers Weekly (starred)

"The Convert's Song is a revelation. Sure, it's a smart, gripping thriller that will have you turning the pages at high speed. But it's also a deep, emotionally resonant story of identity, friendship, and faith. . . . I loved it."—Ivy Pochoda, author of Visitation Street

"The Convert's Song hooked me from its opening scene and kept me hooked to the very end. Sebastian Rotella has written a novel filled with suspense and intrigue, as well as real-world insights into those who commit terrorist acts and those who try to stop them."—Ron Rash, author of Serena and The Cove