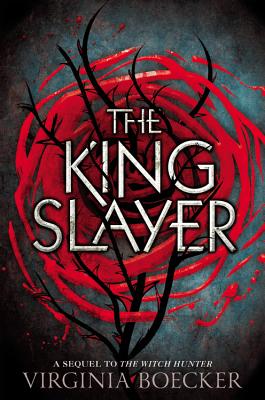 The King Slayer (The Witch Hunter #2)

An action-packed and suspenseful sequel to The Witch Hunter, perfect for fans of Graceling and the Grisha Trilogy.

Former witch hunter Elizabeth Grey is hiding within the magically protected village of Harrow, evading the price put on her head by Lord Blackwell, the usurper king of Anglia. Their last encounter left Blackwell ruined, but his thirst for power grows stronger every day. He's readying for a war against those who would resist his rule--namely Elizabeth and the witches and wizards she now calls her allies.

Having lost her stigma, a magical source of protection and healing, Elizabeth's strength is tested both physically and emotionally. War always means sacrifice, and as the lines between good and evil blur once more, Elizabeth must decide just how far she'll go to save those she loves.

"[Filled] with everything a good fantasy book needs: swords, poison, black magic, and betrayal."--April Tucholke, author of Between the Devil and the Deep Blue Sea, on The Witch Hunter

Praise For The King Slayer (The Witch Hunter #2)…

Praise for The King Slayer:"A satisfying end to a series, this book is perfect for lovers of Cashore's Graceling and Maas's Throne of Glass...The King Slayer is a solid and entertaining read."—VOYA

Praise for The Witch Hunter:
A YALSA 2016 Teens Top Ten Nominee
* "An explosive cocktail of high-stakes adventure... The first-person, present-tense narration is rendered masterfully; coupled with the cinematic vividness of the descriptions, the whole makes for a page-turning delight."—PW (starred review)

"Debut author Boecker's first-person, present tense narrative creates a suspenseful mood by allowing readers to see Elizabeth's secrets, doubts, and fears...The book has plenty of action-sword fights, battles with monsters, black magic, and betrayal-but there is also camaraderie and romance...Fans of Kristin Cashore's Graceling (Houghton Harcourt, 2008) will see similarities in this story of a girl with deadly skills who begins to question using her services to benefit a brutal ruler. This action-packed tale will be a welcome addition to most YA fantasy collections."—SLJ

"In her debut novel (a sequel is planned), Boecker has created an alternate sixteenth-century world whose characters are as intriguing as the magical world they inhabit...Woven within the complex fantasy is a new understanding of friendship and a tenuous but sweet Romeo and Juliet-like love story that promises to blossom, along with the witchcraft, mystery, and bloodletting."—Booklist

"Those who like their stories fast-paced will enjoy this mashup of historical and fantasy. Ghouls, ghosts, magic, and supernatural creatures all appear, lending humor and creepiness in equal measure."—School Library Connection

Virginia Boecker is the author of The Witch Hunter series and An Assassin's Guide to Love and Treason. A graduate of the University of Texas, she had a decade-long career in technology before quitting to become a full-time writer. When she isn't writing, Virginia likes running, reading, traveling, and trying new things (most recently: learning to drive a boat). She has lived all over the world but currently resides in beautiful Lake Oswego, Oregon with her husband, children, a dog called George and a cat named Thomas.
Loading...
or support indie stores by buying on