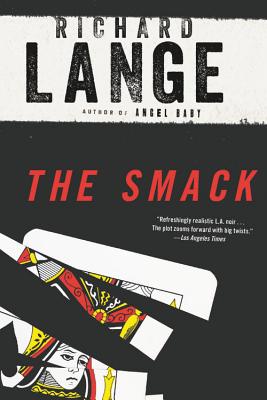 Rowan Petty is a conman down on his luck. He's flat broke, living out of cheap hotels, and wondering how it all went wrong. His car quits on him in Reno, and he takes a job there on the bottom rung of a lousy phone scam. When he's not swindling lonely widows, he tries to turn nickels into dimes at the poker table.

One snowy night, he crosses paths with a sweet-talking hooker who's tired of the streets, and sparks fly. When an old friend of his turns up spreading a rumor about two million dollars in army money smuggled out of Afghanistan and stashed in an apartment in Los Angeles, it seems like a chance at the score of a lifetime. So Petty and the hooker head south, and straight into trouble.

A wounded vet, a washed-up actor, and Petty's estranged daughter are all players in the dangerous game they find themselves caught up in. For the winner: a fortune. For the loser: a bullet to the head. Propulsive, suspenseful, and written with a searing lyricism, The Smack shows once again that "Lange is a writer firing on all cylinders who belongs in the top tier of novelists working today" ( Omaha World-Herald).

Praise For The Smack: A Novel…

"Even inanimate objects come to life in Lange's world. . . . The book is most fun, though, when it focuses on Petty's clever ruses to separate the rubes from their life's savings."—Marilyn Stasio, New York Times Book Review

"Lange is a writer of clean and easy prose, and he's strong at structuring a narrative that builds toward an ever tightening climax. The Smack adds up to one of the nicer surprises of the season."—Jack Batten, Toronto Star

"If Elmore Leonard and Dennis Cooper collaborated on a novel, they might produce something as exciting, harrowing and emotionally powerful as The Smack. Call it a literary thriller or call it thrilling literature--Richard Lange is emerging as the master of a new kind of novel: One that delivers breathless, gripping action while anchored in the authentic troubles of the real world. The Smack arrives like a genuine miracle--that rare thriller that will jack your pulse even as it breaks your heart."—Adam Sternbergh, author of Shovel Ready

"It's hard to imagine Richard Lange wasn't, in some previous life, a hustler from Reno with a girlfriend named Tinafey he met on a professional date who goes to LA to steal a fortune from a one-legged soldier home from Afghanistan and a host of other terrifying individuals. The characters are real and satisfying, the relationships will warm your heart and break it at the same time. The Smack is convincing, hectic and terrific fun."—Joe Ide, author of IQ

"The Smack just might be Mr. Lange's best yet, and that's saying something. His Los Angeles tableau of concrete and graffiti and neon is as sharp as razor wire. The characters are authentic down to the bone, the dialogue pitch-perfect believable, the desperation palpable, the situation urgent, the story riveting. Simply put, The Smack wallops you upside the head with its bad-ass-ness."—Tom Cooper, author of The Marauders

"The Smack is much more than a crime novel. It is a novel about life itself. The secret to great writing isn't just to observe. It's to create a world that readers understand at least as well as they do their own. Richard Lange has accomplished this, and more. His sensitivity and pacing are reminiscent of Raymond Carver, Charles Willeford, and Jim Thompson."
—Gerald Petievich, author of To Live and Die in L.A. and The Sentinel

"Like his protagonist, Dashiell Hammett Award winner Lange (Angel Baby) knows how to reel in his audience with a seductive story and plenty of misdirection. There's nothing criminal, however, about this rollicking, diamond-cut thriller shot through with elegance and heart."—Library Journal (starred review)

"Gritty, poignant . . . Lange is a master at writing about characters on the margins of society and humanizing outcasts and misfits, and he manages to capture the surreal culture of Los Angeles in all its contradictory glory."—Publishers Weekly

"With all the dexterity of Thomas Perry, Lange walks the thin line between caper novel and blood-splattered noir, leading up to a rip-roaring finale. This fine piece of tragicomic crime fiction sets up like a stand-alone, but we'd sure like to see more."—Bill Ott, Booklist

"Richard Lange is
lyrical and astute. The Smack's characters live and breathe in this
thriller-all the way to its blood-pumping finale."—BookPage

"The Smack, by Richard Lange, is yet another diamond found by the haystack sifters at Mulholland Books.—The Durango Telegraph

"This wonderfully written caper novel, so dark and in some parts so depressing, was almost too much for me at first. Author Richard Lange sucks you in and won't let you out at a minimum baseline."—Bookreporter

"A rare combination of realism and inventiveness...adds up to make The Smack Lange's most accomplished novel to date."—Alan Cranis, Bookgasm

Richard Lange is the author of the story collections Dead Boys and Sweet Nothing and the novels This Wicked World and Angel Baby. He is the recipient of a Guggenheim Fellowship, the International Association of Crime Writers' Hammett Prize, and the Rosenthal Family Foundation Award from the American Academy of Arts and Letters. He lives in Los Angeles.
Loading...
or
Not Currently Available for Direct Purchase