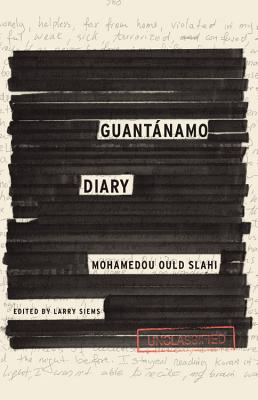 An unprecedented international publishing event: the first and only diary written by a still-imprisoned Guantv°namo detainee.

Since 2002, Mohamedou Slahi has been imprisoned at the detainee camp at Guantv°namo Bay, Cuba. In all these years, the United States has never charged him with a crime. Although he was ordered released by a federal judge, the U.S. government fought that decision, and there is no sign that the United States plans to let him go.

Three years into his captivity Slahi began a diary, recounting his life before he disappeared into U.S. custody and daily life as a detainee. His diary is not merely a vivid record of a miscarriage of justice, but a deeply personal memoir -- terrifying, darkly humorous, and surprisingly gracious. Published now for the first time, Guantv°namo Diary is a document of immense historical importance.

"A longtime captive has written the most profound and disturbing account yet of what it's like to be collateral damage in the war against terror."
—Mark Danner, NYTBR, & Editors' Choice

"Slahi is a fluent, engaging and at times eloquent writer, even in his fourth language, English....Slahi's book offers a first-person account of the experience of torture. For that reason alone, the book is necessary reading for those seeking to understand the dangers that Guantánamo's continued existence poses to Americans in the world."
—Deborah Pearlstein, Washington Post

"A riveting new book has emerged from one of the most contentious places in the world, and the U.S. government doesn't want you to read it....You don't have to be convinced of Slahi's innocence to be appalled by the incidents he describes."
—Kevin Canfield, San Francisco Chronicle

"Slahi emerges from the pages of his diary...as a curious and generous personality, observant, witty and devout, but by no means fanatical....Guantánamo Diary forces us to consider why the United States has set aside the cherished idea that a timely trial is the best way to determine who deserves to be in prison.—Scott Shane, New York Times

"An historical watershed and a literary triumph....The diary is as close as most of us will ever get to understanding the living hell this man--who has never been charged with a crime, and whom a judge ordered released in 2010--continues to suffer."
—Elias Isquith, Salon

"Everyone should read Guantánamo Diary....Just by virtue of having been written inside Guantánamo, Slahi's book would be a triumph of humanity over chaos. But Guantánamo Diary turns out to be especially human. Slahi doesn't just humanize himself; he also humanizes his guards and interrogators. That's not to say that he excuses them. Just the opposite: he presents them as complex individuals who know kindness from cruelty and right from wrong."—Joshua Rothman, The New Yorker

"The tragedy of Slahi's memoir is not just his grave abuse at the hands of U.S. officials. It is that....Slahi's account of life--if it can be called that--at Guantánamo is not the exception. It is the rule, and it continues today."
—Alka Pradhan, Reuters

"Guantánamo Diary stands as perhaps the most human depiction of an entire post-9/11 system."—Omar El Akkad, Globe and Mail

"Literary history was made today with the publication of the first-ever book by a still-imprisoned Guantánamo detainee....As astonishing as the scope of the abuse is Slahi's enduring warmth, even for his torturers and jailers."
—Noa Yachot, Huffington Post

"A vision of hell, beyond Orwell, beyond Kafka: perpetual torture prescribed by the mad doctors of Washington."
—John le Carré

"This is an incredible document, and a hell of a story."
—Steve Kroft, correspondent for 60 Minutes

"Anyone who reads Guantanamo Diary---and every American with a shred of conscience should do so, now---will be ashamed and appalled. Mohamedou Ould Slahi's demand for simple justice should be our call to action. Because what's at stake in this case is not just the fate of one man who managed, against all odds, to tell his story, but the future of our democracy."
—Glenn Greenwald, No Place to Hide: Edward Snowden, the NSA, and the U.S. Surveillance State

"Here, finally, is the disturbing and stirring story the United States government tried for years to conceal. Mohamedou Ould Slahi's ordeal shocks the conscience, to be sure. But on display in these pages is something much deeper as well: an enduring faith in our common humanity, and in the power of truth to leap prison walls and bridge divides. With devastating clarity and considerable wit, Guantánamo Diary reminds us why we call certain things human rights."—Anthony Romero, Executive Director, American Civil Liberties Union

"Once considered such a high-value detainee that former Secretary of Defense Donald Rumsfeld designated him for 'special interrogation techniques'....Slahi had been subjected to sleep deprivation, exposed to extremes of heat and cold, moved around the base blindfolded, and at one point taken into the bay on a boat and threatened with death....Slahi faces no criminal charges."
—Carol Rosenberg, Miami Herald

Mohamedou Slahi was born in a small town in Mauritania in 1970. He won a scholarship to attend college in Germany and worked there for several years as an engineer. He returned to Mauritania in 2000. The following year, at the behest of the United States, he was detained by Mauritanian authorities and rendered to a prison in Jordan.

Later he was rendered again, first to Bagram Air Force Base in Afghanistan, and finally, on August 5, 2002, to the U.S. prison at Guantánamo Bay, Cuba, where he was subjected to severe torture. He was cleared and released on October 16th of 2016 and repatriated to his native country of Mauritania. No charges were filed against him during or after this ordeal.

Larry Siems is a writer and human rights activist and for many years directed the Freedom to Write program at PEN American Center. He is the author, most recently, of The Torture Report: What the Documents Say About America's Post-9/11 Torture Program. He lives in New York.