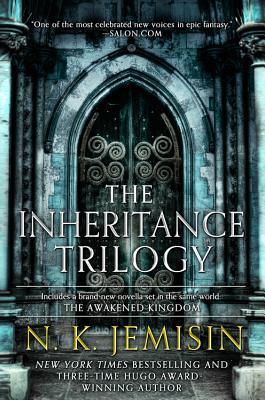 After her mother's death, a young woman is summoned to the floating city of Sky to claim a royal inheritance she never knew existed in this epic fantasy trilogy from the NYT bestselling author of The Fifth Season.

Yeine Darr is an outcast from the barbarian north. But when her mother dies under mysterious circumstances, she is summoned to the majestic city of Sky. There, to her shock, Yeine is named an heiress to the king. But the throne of the Hundred Thousand Kingdoms is not easily won, and Yeine is thrust into a vicious power struggle.

The Inheritance Trilogy omnibus includes the novels: The Hundred Thousand Kingdoms, The Broken Kingdoms, The Kingdom of Gods, and a brand new novella set in the same world: The Awakened Kingdom.

Praise For The Inheritance Trilogy…

"Ah N.K. Jemisin, you can do no wrong...The blend of cultures and lore she draws on to make this very unique world is just stunning, and the fact that she inhabits it with such 3-dimensional characters is even more impressive...If you want to get away from traditional fantasy world-building, but keep the compelling characters and deep lore, definitely pick this up!!"—Felicia Day on The Killing Moon

"Many books are good, some are great, but few are truly important. Add to this last category The Hundred Thousand Kingdoms, N.K. Jemisin's debut novel...In this reviewer's opinion, this is the must-read fantasy of the year."—Booklist

"An offbeat, engaging tale by a talented and original newcomer."—Kirkus on The Hundred Thousand Kingdoms

"In The Killing Moon, Jemisin displays her usual skill at portraying a world whose contours seem simple at first but which quickly break down into something much more complex and dissonant. The world is so fully fleshed out that I could breathe its spices, while the story and characters are so much a part of the world that you could not pull this story or these people out and plug them into a different setting. Jemisin proves yet again that she is one of the important new writers in the sff scene."—Kate Elliott, author of Cold Fire, on The Killing Moon

"Jemisin...creates a fabulously diverse array of peoples and lands, shot through with magic, loss, sex, and heartbreak."—NPR Books on The Inheritance Trilogy

"An absolutely fascinating read."—RT Book Reviews on The Killing Moon

"A delight for the fantasy reader."—Library Journal (Starred Review) on The Hundred Thousand Kingdoms

"The best book I've ever read."—Daveed Diggs of Hamilton

"In the first book of Jemisin's richly detailed Inheritance trilogy, an outcast heroine must find a way to hold her own amid the treachery of her grandfather's court. I've got a special place in my heart for political intrigue, so this book was a delight through and through!"—Cassandra Clare on The Hundred Thousand Kingdoms

N. K. Jemisin is a Brooklyn author who won the Hugo Award for Best Novel for The Fifth Season, which was also a New York Times Notable Book of 2015. She previously won the Locus Award for her first novel, The Hundred Thousand Kingdoms, and her short fiction and novels have been nominated multiple times for Hugo, World Fantasy, Nebula, and RT Reviewers' Choice awards, and shortlisted for the Crawford and the James Tiptree, Jr. awards. She is a science fiction and fantasy reviewer for the New York Times, and you can find her online at nkjemisin.com.
Loading...
or support indie stores by buying on