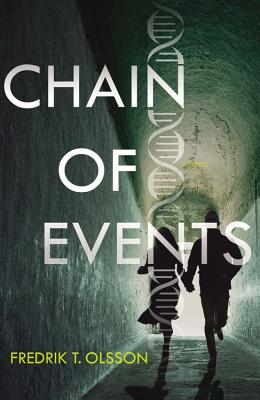 A stunning debut thriller about a code that threatens humanity -- and the only man who can crack it.

William Sandberg, once a well-respected military cryptologist pursuing cutting-edge research, is a ruined man. His career is in shambles, his marriage is over, and he's succumbed to a dark depression.

But William's talents haven't gone unnoticed. A nameless, top-secret organization abducts him and tasks him with a daunting mission: decode a message that will reveal the disastrous prophecies hidden in our DNA before it is too late.

Meanwhile, William's ex-wife Christina is haunted by his absence and suspects there is more to his disappearance than just the reclusive impulse of a depressed man. Driven by her hunch, she sets out to find him and joins an eclectic cast of characters all drawn to a mysterious chateau in the Alps where the secret organization is plotting something-but is it revenge? Or a rescue mission? What is the organization hiding? What does the code have to do with the potent virus suddenly spreading around the world? And can William uncover the truth before it's too late?

A thrilling novel about humanity on the verge of crisis, taking readers from the streets of Berlin and Stockholm to a chateau in the Alps, Chain of Events explodes and then reconfigures the ties that bind us to one another: marriage, politics, and our DNA.

Praise For Chain of Events: A Novel…

"Secrets are unveiled with a masterful sense of pace.... Olsson has the page-turning power of Michael Crichton."
—The Sun (UK)

"Olsson lines up a sympathetic and well-developed cast of characters, inserts them into some interesting places, and allows very few dull moments, especially once the action really gets rolling. An end-of-the-world-as-we-know-it thriller featuring two unlikely, but very likeable protagonists."
—Kirkus Reviews

Born in 1969 outside Göteborg on the Swedish west coast, Fredrik T. Olsson spent most of his childhood writing, acting and producing plays. Refusing to grow up, this is pretty much what he has kept doing since. A full-time screenwriter for film and television since 1995, Fredrik has written scripts in genres ranging from comedy to thrillers, as well as developing, show running and head-writing original material for various Swedish networks. He is also a standup comedian and makes occasional contributions as a director.
Loading...
or support indie stores by buying on