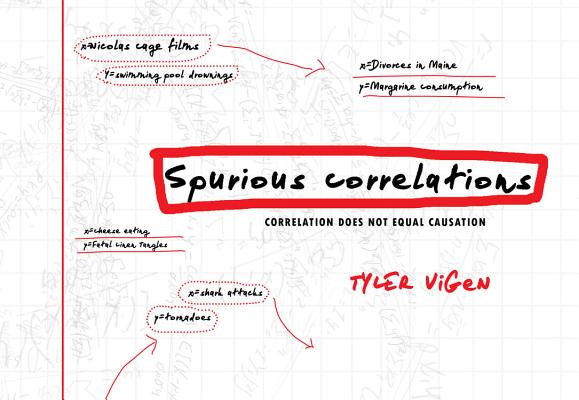 "Spurious Correlations ... is the most fun you'll ever have with graphs."--Bustle

Is there a correlation between Nic Cage films and swimming pool accidents? What about beef consumption and people getting struck by lightning? Absolutely not. But that hasn't stopped millions of people from going to tylervigen.com and asking, "Wait, what?" Vigen has designed software that scours enormous data sets to find unlikely statistical correlations. He began pulling the funniest ones for his website and has since gained millions of views, hundreds of thousands of likes, and tons of media coverage. Subversive and clever, Spurious Correlations is geek humor at its finest, nailing our obsession with data and conspiracy theory.

Tyler Vigen is a student at Harvard Law School. He created the Spurious Correlations website during a week before finals, when he probably should have been studying. Prior to attending Harvard, Tyler was trained in visual intelligence collection and analysis by the military.

Although it is often funny, Vigen adds that 'this book has a serious side. Graphs can lie, and not all correlations are indicative of an underlying causal connection.' We may love to contemplate the data that seem to connect sharks and tornados (who wouldn't?), but Vigen's reminder is important when we're faced with spurious correlations in the wild, played not for laughs but to mislead.—Boston Globe

The perfect little book for adding fuel to your Dad's font of...information."—Bustle

"Draws into comical and obvious relief how easily we can get trapped into seeing relationships where there are none."—Boston Globe

"Spurious Correlations...is the most fun you'll ever have with graphs."—Bustle
or support indie stores by buying on
Copyright © 2020 American Booksellers Association