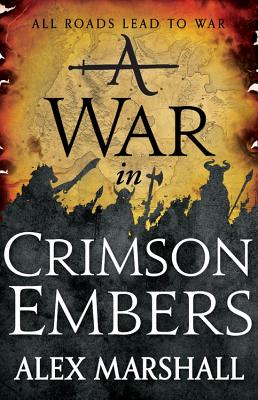 Praise For A War in Crimson Embers (The Crimson Empire #3)…

"A fitting conclusion to an original and exciting fantasy trilogy."—Booklist on A War in Crimson Embers

"Thrilling action set pieces."—Kirkus on A War in Crimson Embers

"This is a fitting follow-up to the first Crimson Empire book; full of bloody battles and strong females ... The writing and setting are rich ... Purna is a strong character who adds an interesting dynamic to the twisted and surprising story."
—RT Book Reviews on A Blade of Black Steel

"Alex Marshall builds a sprawling world that grows larger and deeper with every page. Instantly believable. Zosia and her Five Villains are as fun as they are twisted."—David Dalglish on A Crown for Cold Silver

"Brimming with imagination and invention... Fabulous!"—John Gwynne on A Crown for Cold Silver

"This brawny revenge fantasy feels like a Tarantino movie: a hugely entertaining mix of adventure and comedy, punctuated by moments of darkness, with clever dialogue and explosive set-pieces... A pure joy to read."—Booklist (Starred Review) on A Crown for Cold Silver

"This lusty debut will have you gasping in one breath and laughing in the next ... Marshall is playing a long, glorious game."
—Washington Post on A Crown for Cold Silver

"An epic tale of invasion, civil war, and divine incursion."
—Kirkus on A Crown for Cold Silver

Alex Marshall is a pseudonym for Jesse Bullington, acclaimed author of several novels in different genres including The Sad Tale of the Brothers Grossbart and The Enterprise of Death. He lives in the Pacific Northwest.
Loading...
or support indie stores by buying on