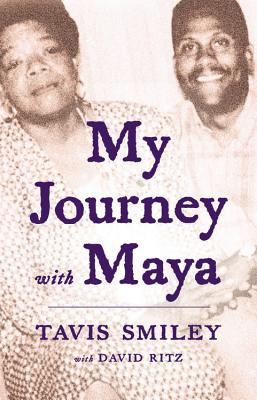 My Journey with Maya

A remarkable story of friendship, love, and courage.

When Maya Angelou and Tavis Smiley met in 1986, he was twenty-one and she was fifty-eight. For the next twenty-eight years, they shared an unlikely, special bond. Angelou was a teacher and a maternal figure to Smiley, and they talked often, of art, politics, history, race, religion, music, love, purpose, and -- more than anything -- courage. Courage to be open, to follow dreams, to believe in oneself.

In My Journey with Maya, Smiley recalls a joyful friendship filled to the brim with sparkling conversation -- in Angelou's gardens surrounded by her caged birds, before lectures, sharing meals, and on breaks from it all, they sought each other out for comfort, advice, and above all else, friendship.

It began when he, a recent college graduate and a poor kid from a big family in the Midwest, was invited to join the revered writer on a sojourn to Africa. He would be handling her bags, but Maya didn't let that stop a friendship waiting to happen. Angelou was generous, challenging, and inspirational. Like a mother to him, she was selfless.

Here Tavis Smiley shares his personal memories of Maya Angelou, of a decades-long friendship with one of history's most fascinating women, one who left as indelible an imprint on American culture as she did on him.

Praise For My Journey with Maya…

"Every page is saturated with spirit-lifting advice...'If you arrived feeling good, you left feeling better.' The same can be said of reading Smiley's book."
—Dawn Raffel, Oprah's Book Club 2.0

"A beautiful memoir and tribute to a fallen friend.... Smiley's engaging memoir chronicles his wondrous sojourn to Ghana with Angelou and her entourage, vividly recalling conversations, sights, sounds and even thoughts that he had along the way."
—Kimberly C. Roberts, The Philadelphia Tribune

"Smiley proves to be a faithful recorder of Angelou's poise, compassion, and dignity.... Readers might feel regret for not having the privilege of meeting Angelou personally, but Smiley has faithfully re-created both her voice's 'haunting beauty and lilting musicality' and the experience of receiving her transformative wisdom, humor, and compassion."
—Kirkus Reviews

"Both a tribute and a memoir.... My Journey with Maya is a passionate depiction of a true Renaissance woman. One hopes it will lead readers back to Angelou's many books."—Lisa Page, The Washington Post

"Smiley writes about Angelou...with such reverence, respect and fondness that the reader can't help but envy their bond.... His willingness to pat the seat next to him, inviting us to worship at the altar of Angelou alongside him and countless other of her 'children,' feels like an insider's treat.... She lives on in his Journey."—Arienne Thompson, USA Today

"Angelou's personality comes through in the book, which opens up a remarkable connection to a legacy of African American intellectual and creative life..."
—Carolyn Kellogg, Los Angeles Times

"For Angelou admirers and those intrigued with black culture, Smiley's glowing praise-song reminds us of what her singular, exceptional presence meant to her community and the nation."
—Publishers Weekly

"Confidence and compassion compliment one another throughout his portrait of Maya Angelou. Well-written and highly entertaining, Smiley's work engages the reader from beginning to end.... Smiley's transformative memoir depicts the power of travel, the importance of experience, and how it can change one's perception of place and its culture."
—Ashley Mahoney, The Charlotte Post

Tavis Smiley is the host of PBS's Tavis Smiley and Public Radio International's The Tavis Smiley Show.Smiley is also the bestselling author of 17 books. He lives in Los Angeles, California.
Loading...
or
Not Currently Available for Direct Purchase