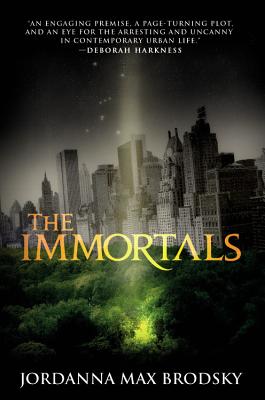 In this modern-day "lively re-imagining of classical mythology" (Deborah Harkness), when a string of women are murdered in an ancient pagan ritual, Selene DiSilvia -- known by some as the goddess Artemis -- hears their cries for help and takes up her bow once more.
Manhattan has many secrets. Some are older than the city itself.

The city sleeps. In the predawn calm, Selene DiSilva finds the body of a young woman washed ashore, gruesomely mutilated and wreathed in laurel. Her ancient rage returns, along with the memory of a promise she made long ago -- when her name was Artemis.
Jordanna Max Brodsky's acclaimed debut sets Greek Gods against a modern Manhattan backdrop, creating an unputdownable blend of myth and mystery.
The Olympus Bound series:
The Immortals
Winter of the Gods
Olympus Bound
For more from Jordanna Max Brodsky, check out:
The Wolf in the Whale

Jordanna Max Brodsky hails from Virginia, where she spent four years at a science and technology high school pretending it was a theater conservatory. She holds a degree in History and Literature from Harvard University. When she's not wandering the forests of Maine, she lives in Manhattan with her husband. She often sees goddesses in Central Park and wishes she were one.

Praise For The Immortals (Olympus Bound #1)…

"The Immortals is a lively re-imagining of classical mythology with an engaging premise, a page-turning plot, and an eye for the arresting and uncanny in contemporary urban life."—Deborah Harkness, New York Times bestselling author of A Discovery of Witches

"Brilliantly conceived and tautly plotted, The Immortals is a pulse thrumming, fascinating novel. Selene is a perfect heroine for our times."—Eliot Schrefer

"Imaginative
and fast-paced, The Immortals is pulse-pounding entertainment."—Kevin O'Brien, New York Times bestselling author of No One Needs to Know

"Brodsky's writing has claws...They sink in with the first word and don't let go until you are finished with the book."—Darynda Jones, New York Times bestselling author

"Painstakingly researched, intellectually complex, and deeply rooted in the history and mythology of Ancient Greece, THE IMMORTALS is a richly imaginative, multi-layered tale that stimulates the heart and the mind in equal measure."—Ian Caldwell, New York Times bestselling author

"This series launch is a wonderful choice for fans of Greek myths and urban fantasy readers looking for something different."—Library Journal (starred review)

"Brodsky's thriller feeds on the long-held love of Greek mythology in a reimagined, present-day world where gods and goddesses still walk among us."—Booklist