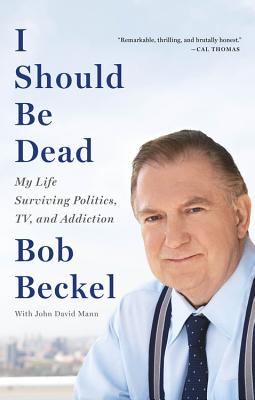 I Should Be Dead (Hardcover)

From Bob Beckel, the popular co-host of "The Five" on Fox News Channel, a deeply moving, redemptive memoir about his life as a political operative and diplomat, his long struggle with alcohol and drugs, and his unlikely journey to finding faith.

Growing up poor in an abusive home, Bob Beckel learned to be a survivor: to avoid conflict, mask his feelings, and to lie--all skills that served him well in Washington, where he would become the youngest-ever Deputy Assistant Secretary of State and manage Walter Mondale's 1984 presidential campaign.

But Beckel was living a double life. On January 20, 2001--George W. Bush's first Inauguration Day--he hit rock bottom, waking up in the psych ward. Written with captivating honesty, Beckel chronicles how his addictions nearly killed him until he found help in an unexpected ally, conservative Cal Thomas, who helped him find faith, get sober, and get his life back on track.

Bob Beckel rejoined FOX News Channel as co-host of "The Five" in January 2017. He worked for the U.S. State Department (1977-1980), where he served as the youngest Deputy Assistant Secretary of State for the Carter Administration. A graduate of Wagner College, Beckel served as national campaign manager for Walter Mondale's presidential campaign.

Praise For I Should Be Dead: My Life Surviving Politics, TV, and Addiction…

"A great read, perhaps as an engaging psychological study for some, and a must read for fans of The Five."—The Daily Caller

"The kind of eye-opener that Dante Alighieri got when Virgil took him on a tour of the Inferno."—The Washington Times

"In this remarkable book, Bob Beckel reveals for the first time some of his failings, challenges and temptations, not to glorify them, but to give the reader a sense of the magnitude of the grace of God, who rescued Bob in his darkest hour. Thrilling and brutally honest, Bob's memoir will give you an entirely different sense of the man, beyond the silliness of the political world and media in which we both work and live."—Cal Thomas, Syndicated and USA Today Columnist and Fox News Contributor

"An inspiring, truthful, humorous, and insightful account of a survivor's quest to ascend in the world of politics, the campaign trail, Washington, and life. This is a must read for anyone who cares to understand the pain caused by early adversity and the influence it can have on the development of addiction. Bob Beckel delivers a truly captivating account of his life."—Peter Przekop, D.O., Ph.D., Director of Pain Management, Betty Ford Center; faculty member, Loma Linda University Medical School

"Bob Beckel's candor about his challenges doesn't surprise me. In our nearly thirty years of friendship, he has always been willing to tell it like it is, or at least as he sees it. We don't always see things the same, but I greatly respect him for fighting the demons of addiction and being willing to tell the story of those fights so openly."—Haley Barbour, former Governor of Mississippi

"I have known Bob Beckel for more than forty years. We have been steadfast friends through thick and thin. In a field where loyalty is a situational commodity, Bob's loyalty is a granite mountain. In a sphere where true honesty is rare and too often fleeting, Bob is among the most honest men I have ever known. I Should be Dead will make you laugh, it will make you cry, and every page will be a revelation--and absolutely true. I couldn't put it down; after knowing Bob four decades it was a stunning epiphany."—Patrick Caddell, Fox News contributor, Former Democratic Pollster and strategist
or
Not Currently Available for Direct Purchase
Copyright © 2020 American Booksellers Association