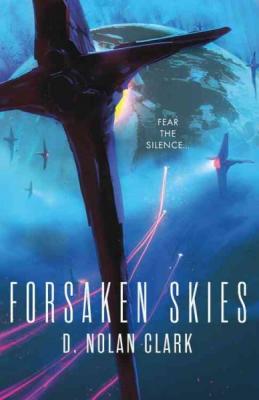 A small band of pilots fight against a seemingly unstoppable alien empire in this thrilling space opera.

Commander Lanoe's skills made him a hero of the interplanetary civil war, but he was left with nothing except battle scars and painful memories.

But now he faces the greatest threat mankind has ever known.

Once again, Lanoe must go to war -- but he does not go alone. A ragtag band of criminal and outcast pilots stand with him. Some are old friends, one an old enemy, and despite their own battle scars, they are the only ones willing to fight back.

Sometimes the few must stand against the many, but the best these aces can do might not be good enough.

This explosive first novel from D. Nolan Clark is an epic tale of a fight against the odds -- and the terror of realizing that we're no longer alone in the cold vacuum of space.

Praise For Forsaken Skies (The Silence #1)…

"Unforgettable characters and is jam-packed with action [and] adventure... one readers will not want to miss."—Booklist

"About as exciting an action story set in space as any this reviewer has seen in print in quite some time. It is worth the read... a terrific and thrilling novel."—SciFi Magazine

D. Nolan Clark is a pseudonym for an acclaimed author who has previously published several novels in different genres.
Loading...
or
Not Currently Available for Direct Purchase