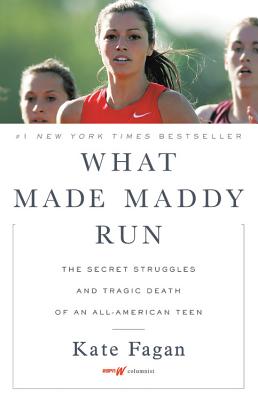 What Made Maddy Run

The heartbreaking story of college athlete Madison Holleran, whose life and death by suicide reveal the struggle of young people suffering from mental illness today in this #1 New York Times Sports and Fitness bestseller.

If you scrolled through the Instagram feed of 19-year-old Maddy Holleran, you would see a perfect life: a freshman at an Ivy League school, recruited for the track team, who was also beautiful, popular, and fiercely intelligent. This was a girl who succeeded at everything she tried, and who was only getting started. But when Maddy began her long-awaited college career, her parents noticed something changed. Previously indefatigable Maddy became withdrawn, and her thoughts centered on how she could change her life. In spite of thousands of hours of practice and study, she contemplated transferring from the school that had once been her dream.

When Maddy's dad, Jim, dropped her off for the first day of spring semester, she held him a second longer than usual. That would be the last time Jim would see his daughter. What Made Maddy Run began as a piece that Kate Fagan, a columnist for espnW, wrote about Maddy's life. What started as a profile of a successful young athlete whose life ended in suicide became so much larger when Fagan started to hear from other college athletes also struggling with mental illness.

This is the story of Maddy Holleran's life, and her struggle with depression, which also reveals the mounting pressures young people -- and college athletes in particular -- face to be perfect, especially in an age of relentless connectivity and social media saturation.

Praise For What Made Maddy Run: The Secret Struggles and Tragic Death of an All-American Teen…

Praise for What Made Maddy Run

Semi-Finalist for the PEN/ESPN Award for Literary Sportswriting

"Fagan does an exceptional job laying out [Maddy's] pain in a narrative style that is both persuasive and honest . . . a comprehensive, essential, and well-written piece about mental health, as well as a small step toward reducing the stigma around anxiety and depression."—Erin McCarthy, Philadelphia Inquirer

"A compassionate and frank look at depression and the social pressure faced by many college students as seen through the eyes of one young woman."—Kirkus

"With immense empathy, [Fagan] shares insights particular to student athletes, but presents them in universally accessible language and connects with the non-athlete through vivid examples"—Shelf-Awareness

"Fagan delivers the sequence of events in such a heartfelt but very real way"—Caitlyn Pilkington, Women's Running

"Holleran seems so alive on the page; her messages and Fagan's prose create someone who seems a real, living thing, so much so that by the end, this reader was rooting for her to talk to someone"

"The book goes beyond telling a heartbreaking story; it encourages compassion toward young adults struggling with mental health issues and will ultimately help us think about ways to prevent similar tragedies."—National Book Review

"Fagan's book is well-researched and the message is timely and important."—Publishers' Weekly

"It is impossible not to be affected by Holleran's heart-wrenching story. An appropriate (if difficult) read for current and future college athletes, their coaches, and parents."—Library Journal

"the must-read book of 2017 for runners or competitive athletes of all kinds...thoroughly researched, written with sensitivity"—Sinead Mulhern, Canadian Running

"Covering an issue as sensitive as a teen suicide is no easy task and Fagan's compassion and desire to prevent more students from following Holleran's path shows in her writing. I would recommend this book to anyone who wants to be better informed about mental health issues among college students."—Carina Julig, cuindependent.com

"A provocative and thoughtful look at a student-athlete suicide that rocked the nation--but didn't, until now, actually help inform the nation. A labor of love and prevention by Kate Fagan, and Maddy's family and friends."

—Stephen Fried, best-selling author of Thing of Beauty and with Patrick Kennedy, A Common Struggle

Kate Fagan is an Emmy award-winning journalist and the #1 New York Times bestselling author of What Made Maddy Run, which was longlisted for the PEN/ESPN Award. She currently works for Meadowlark Media and writes for Sports Illustrated, and previously spent seven years as a columnist and feature writer for espnW, ESPN.com and ESPN The Magazine. She lives in Charleston, South Carolina with her wife, Kathryn Budig, and their two dogs.