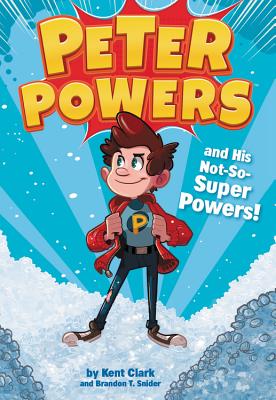 Peter Powers and His Not-So-Super Powers!

Everyone in Peter Powers' family has super awesome superpowers. His dad controls fire with his mind, and his mom can fly. His big brother makes copies of himself, and his little sister is super-strong. And his baby brother even turns invisible! But all Peter can do is--this is really embarrassing--make ice cubes with his fingertips.

When Captain Tornado comes to town and begins robbing banks, will Peter Powers and his totally lame abilities step up to save the day--or will he get cold feet? Join Peter Powers and his fantastic family for their first action-packed and fun-filled adventure to find out!

Peter Powers and His Not-So-Super Powers is the first in a new chapter book series of exciting stories about a young boy who has the worst superpower ever. Each story is full of humor, action, and fun, but the charm can be found in the heartfelt message about the power of family, friends, and having confidence.

Dave Bardin is an illustrator by day and, well, night too. When he's not drawing in his Stronghold of Seclusion he patrols the streets, protecting the innocent and vanquishing evil. Strangely, the source of his powers is also his one weakness--MASHED POTATOES!
or support indie stores by buying on