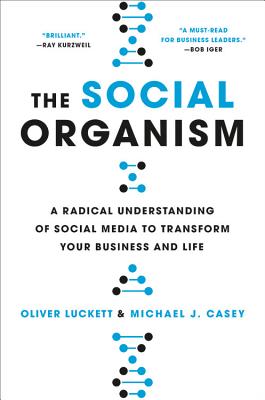 "A must-read for business leaders and anyone who wants to understand all the implications of a social world." -- Bob Iger, Chairman and Chief Executive Officer of The Walt Disney Company

From tech visionaries Oliver Luckett and Michael J. Casey, a groundbreaking, must-read theory of social media -- how it works, how it's changing human life, and how we can master it for good and for profit.

In barely a decade, social media has positioned itself at the center of twenty-first century life. The combined power of platforms like Facebook, Twitter, Instagram, Snapchat, and Vine have helped topple dictators and turned anonymous teenagers into celebrities overnight. In the social media age, ideas spread and morph through shared hashtags, photos, and videos, and the most compelling and emotive ones can transform public opinion in mere days and weeks, even attitudes and priorities that had persisted for decades.

How did this happen? The scope and pace of these changes have left traditional businesses -- and their old-guard marketing gatekeepers -- bewildered. We simply do not comprehend social media's form, function, and possibilities. It's time we did.

In The Social Organism, Luckett and Casey offer a revolutionary theory: social networks -- to an astonishing degree--mimic the rules and functions of biological life. In sharing and replicating packets of information known as memes, the world's social media users are facilitating an evolutionary process just like the transfer of genetic information in living things. Memes are the basic building blocks of our culture, our social DNA. To master social media -- and to make online content that impacts the world -- you must start with the Social Organism.

With the scope and ambition of The Second Machine Age and James Gleick's The Information, The Social Organism is an indispensable guide for business leaders, marketing professionals, and anyone serious about understanding our digital world -- a guide not just to social media, but to human life today and where it is headed next.

Praise For The Social Organism: A Radical Understanding of Social Media to Transform Your Business and Life…

"If anyone can help
us understand this digitally connected world, it's [Luckett and Casey]--and they
don't disappoint.... The book offers a deeply informed and nuanced portrait of
the social-media landscape, supported by numerous examples.....This is an
overarching theory of social media, spanning disciplines from biology to
anthropology to business to computer science... Compelling."—Booklist

"Social media is the most obvious recent way that human life is being forever changed by technology. This book's brilliant unifying metaphor, the Social Organism (which is the converse of my mentor Marvin Minsky's book Society of Mind) illuminates how the ground is shifting beneath our feet. As Luckett and Casey conclude, social media will begin to act more and more like a global brain. The implications for our way of life, our governments, and our businesses are immense. I cannot recommend this book enough."—Ray Kurzweil, inventor, author, and futurist

"The Social Organism's exploration of social media goes far beyond a recipe for clicks and 'likes' and presents a deeply convincing theory of how life is changing in the digital age, and how you can use social media not only to transform your business but to help change the world."—Arianna Huffington, Co-Founder and Editor-in-Chief of The Huffington Post and #1 New York Times bestselling author of The Sleep Revolution

"In less than a decade, social media has gone from fringe to mainstream. In the next decade, it will reorder the ways people communicate, work together, trade, and pursue ideas. Luckett and Casey have written the quintessential guide to understanding our social future."—Marc Andreessen, co-founder and general partner, Andreessen Horowitz

"When I started my first business in 1992, there was no social media. Today, no successful business is launched without a social strategy. This book is the best guide out there. Want to build a brand or a cause? Start by reading this."—Daymond John, CEO of FUBU, CEO of Shark Branding, Co-Star on ABC's Shark Tank, bestselling author of The Power of Broke

"I saw how humankind can use the Internet to bring about positive change when Oliver Luckett helped register 2 million new voters for the Declare Yourself campaign we initiated in 2004. Since then, social media seems to have delivered such transformative change again and again. In their deeply insightful new book, The Social Organism, Oliver and Michael Casey make sense of it all. Finally, even this ancient clunk of an Internet user has some sense of what it's all about and where we're heading."—Norman Lear

"Social media and its complexity may appear to be disordered chaos, but, using a natural and biological lens, The Social Organism helps us make sense of this powerful new system. Important reading for anyone trying to understand the world."—Joi Ito, Director, MIT Media Lab and Co-Author of Whiplash: How to Survive Our Faster Future

"As individuals, we are the authors of our own thoughts. But, social media has triggered emergence. The sum of our public thoughts has become greater than the whole--a new life has manifested. The Social Organism brings context and perspective to this, our hyperconnected ecosystem."—Biz Stone, Co-Founder, Twitter, Medium, and Jelly; author of Things a Little Bird Told Me

"The Social Organism is a remarkable hybrid: a riveting history of mass media, a convincing guide to the landscape of digital platforms, and an indispensable window into our future world. It's a must-read for business leaders and anyone who wants to understand all the implications of a social world."—Bob Iger, Chairman and Chief Executive Officer of The Walt Disney Company

"The Social Organism is essential for anyone seeking a deeper understanding of the role and power of this medium."—SmallBizTrends.com's Top 10 Social Media Books

Oliver Luckett is a technology entrepreneur and currently CEO of ReviloPark, a global culture accelerator. He has served as Head of Innovation at the Walt Disney Company and co-founder of video sharing platform Revver. As CEO of theAudience, Luckett worked with clients such as Obama for America, Coachella, Pixar, and American Express. He has helped managed the digital personae of hundreds of celebrities and brands, including Star Wars, The Chainsmokers, Steve Aoki, and Toy Story 3.

Michael Casey is a writer and researcher in the fields of economics, culture, and information technology. He is the author of three critically-acclaimed books: The Age of Cryptocurrency (2015), The Unfair Trade (2012), and Che's Afterlife (2009). In a two-decade career as a journalist, much of that spent as a reporter, editor, and columnist at the Wall Street Journal, he wrote extensively on global economics and finance. In 2015 Casey become a Senior Advisor at MIT Media Lab's new Digital Currency Initiative.
Loading...
or
Not Currently Available for Direct Purchase