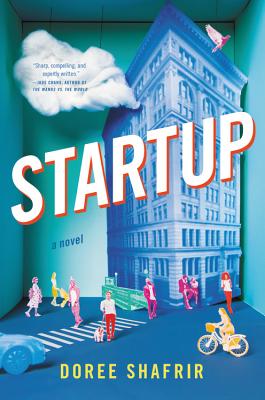 Praise For Startup: A Novel…

"Shafrir has a deft, easy touch, but her take on gender politics in the workplace is razor-sharp. This ruthlessly clever look behind the scenes at a New York start-up demands a sequel."
—Kim Hubbard, People

"Startup is a dramedy-of-errors, a Shakespearean yarn of secrets, sex, miscommunication, misogyny, and money...Crack this one open on the beach and you just might find yourself a little more enlightened when you return to the workplace."
—Lexi Pandell, Wired.com, 9 Essential Summer Reads

"Though often wickedly witty, Startup is so much more than mere satire; it's a smart, deeply empathetic novel genuinely interested in exploring the way we live now."
—Rumaan Alam, author of Rich and Pretty

"This funny, empowering debut is chock-full of strong women transcending the workplace drama, sexual politics, and all-around dumb stuff the men in their life are doing. It's a novel that just might spark the official feministing of startup culture. If I were a tech bro, I'd be shaking in my hoodie."—Camille Perri, author of The Assistants

"Don't buy this book. Don't open. Don't start reading it. Because if you do, I can assure you, you won't be able to put it down. I was hooked from the first page and found myself lost in a beautifully-written fiction that so succinctly echoes today's bizarre reality."
—Nick Bilton, Special Correspondent, Vanity Fair and author of Hatching Twitter: A True Story of Money, Power, Friendship, and Betrayal

"Is there a satirist alive more brilliant--and more insightful--than Doree Shafrir? That I tore through Startup in a single day--ignoring the cries of my children and the dinging of my phone, laughing with recognition at her characters' foibles-is perhaps not nearly as significant as the fact that this ridiculously compelling novel has haunted me, every minute, in the weeks that followed. If you have ever lived in New York or worked in an office, you will love this novel. If you love the novels of Tom Perrotta, you will love this novel. But also: If you are a sentient human, you will love this novel."—Joanna Rakoff, author of My Salinger Year and A Fortunate Age

"Doree Shafrir's Startup is like a thrilling combination of Po Bronson's Bombardiers and Jessica Knoll's Luckiest Girl Alive. Shafrir has set heartbreak and romance in the ticking clock environment of startups and the result is a topical, funny and perfectly observed document of our insane times."—Karl Taro Greenfeld, author of Triburbia and The Subprimes

"Doree Shafrir is so spot-on in her observations about the tech world that it's hard not to think this novel must be telling the juicy truth-and in a way it is. Sharp, compelling, and expertly written."
—Jade Chang, author of The Wangs vs. The World

"A funny, delicious and charming novel about the alternate reality of startups #divine."—Delia Ephron, author of Siracusa

"What a tremendous book. Fun, breezy and charming. I think I finally understand the Internet and I'm both gladdened and depressed."
—Gary Shteyngart, author of Super Sad True Love Story

"Exacting, though not without empathy--Shafrir renders even the most infuriating of her characters with unexpected humanity-the novel is a page-turning pleasure that packs a punch. To call it expertly observed is an understatement."—Kirkus (Starred Review)

"Funny and unflinching, Shafrir's cast is chock full of strong women taking charge of a world the boys still think is their own... [a] sharp debut novel".—Girlboss

"I tore through Startup in two days. It could've been one, but I had to eat, sleep, and feed my cats-all normal activities that became frustrating distractions while reading this book. Well-observed and told with a crackling wit, this debut is one of the best I've read so far this year."—Amy Brady, Lit Hub

"Shafrir's compulsively readable debut novel is hilarious, smart, and timely; it feels like a necessary read right now, so perfectly does it deal with issues like the insatiable media, the weird place where wellness and technology meet, and why white men suck so badly-especially when they have just a little bit of power."—Kristin Iversen, Nylon

"A pitch-perfect depiction of the industry's culture and sexual politics."—Elle

"[A] very contemporary screwball comedy, this is a cheerful satire... good, dizzy fun, if you can put your iPad down long enough to read it."
—Moira Macdonald, The Seattle Times

"Move over, Silicon Valley. Shafrir's satirical novel is set in the New York tech scene, where a cast of characters are swept into the rise (and viral fall) of a mindfulness app called TakeOff. A tech writer herself, Shafrir makes incisive, astute, and all too real observations on the idiosyncrasies of the industry. This a fun, breezy, utterly millennial read."—Elena Nicolaou, Refinery29, Best Beach Reads 2017

"Some people are calling Startup a satire, but you get the feeling that there's very little air between Doree Shafrir's alternately hilarious and unsettling novel and reality."
—Adam Rathe, Town & Country

"In her debut, BuzzFeed culture writer Shafrir skewers a world she knows well--startup culture and the outlets assigned to cover it."—Publishers Weekly

"Buzzfeed writer Shafrir's debut is full of humor and layered in truth as she exposes the underbelly of start-up culture."—Library Journal

"Part of the joy of reading Startup is deciphering which parts are based in fact and which are fiction, but even if you don't care about guessing who's who you'll find the read a charming one."—Maris Kreizman, New York Magazine's Vulture Blog

"It explores modern workplace culture while highlighting the strengths of women who work--this is a must-read that you won't be able to put down."—Alexandra Wilson, Stylefox

"Funny, hip and clever, Shafrir's Startup slices through the world of tech startups and the kids running them."
—Shelf Awareness

"Startup is a clever novel about trying to connect in the tech-heavy world we live in now."—Brenda Janowitz, PopSugar

"Startup is compulsively readable. You will probably finish it in a day, because you will never find a reason to put it down."
—Alex Balk, The Awl

"Fast-paced and engaging...Shafrir's touch is just right in this debut novel. She's got the excesses of this industry nailed."—Shawna Seed, The Dallas Morning News

"Smart, amusing... a coming-of-age novel for these digital times.... Doree Shafrir manages to hold our interest for more than 140 characters as she pokes fun at a group of young overachievers in this old-school written form."—Clea Simon, The Boston Globe

"If you love smart, true-to-life novels and are fascinated by the startup world, this is the book for you."—Bookish

"Startup's greatest accomplishment is the care and sensitivity with which it adapts app-based communication for a more traditionally novelistic format...As the world hurtles ever onward at a breakneck clip, Startup illustrates the dystopian quality of our destabilizing present by generating nostalgia for it. "—Helen Holmes, Rolling Stone

"Shafrir smartly - but lovingly - skewers tech culture, its grandiose leaders and the naivety of thinking that good intentions, lots of money and a mindset of fun will prevent bad behaviors in the workplace."—Matt Tiffany, Portland Press Herald

"Eerily on-point in its illustration of this universe-especially when it comes to gender dynamics."—Hope Reese, Hazlitt

"Shafrir presents a humorous and thoughtful meditation about both the sexism in tech, and its counterpoint, as one character describes it: today's 'very male-hostile moment.' More than anything, the book will leave you wishing there were more like it."
—Anne VanderMey, Fortune

"Startup may have read as satire a decade ago but feels like historical record today. Shafrir's precise eye for detail takes stock of the tech industry's favorite answers for tough questions ... Startup is about more than business. It navigates the rocky foundation of relationships, journalism's importance, sexual harassment, and digital careerism."—Andy Newman, The Millions

"Doree Shafrir, senior culture writer at Buzzfeed, has written a novel of manners for the digital age. Startup could be called Pride and Prejudice and Tech Bros; Shafrir turns a sharp eye on the culture of techy startups and their unspoken moral codes."—Heather Scott Partington, Las Vegas Weekly

"Takes jabs at the pretentiousness that's all too common among the young and brash tech workforce."
—Michael B. Farrell, Christian Science Monitor

"The book aptly skewers the trappings of the tech industry, but also gets to the heart of one of its most a persistent and pernicious issues--its treatment of women."—Nina Zipkin, Entrepreneur Magazine

"Highly entertaining... this is my pick for your beach bag."
—Lexi Mainland, A Cup of Jo, Seven Big Summer Books

"A satire about the New York tech scene that pulls no punches when it comes to inconsistencies between the rhetoric around humane, supportive office culture and many workers' realities."
—Evie Nagy, The Official Slack Blog

"A pointed illustration of the tech world's cults of personality, the outsized egos that believe something like a mindfulness app could change the world, and the seedy underbelly of all that workplace closeness: sexual harassment."—Angela Shah, Xconomy

"In an industry ripe for satire and criticism, Shafrir tweaks the startup culture beautifully while introducing characters you will actually care about."
—James McQuiston, NeuFutur

"Our favorite BuzzFeed editor brings her storytelling prowess to the next level in this dazzling debut about the adventures (and misadventures) of one startup... Startup belongs on your summer TRL."
—Brit + Co.

"Close out of Twitter and start turning the pages of this novel by a Buzzfeed writer who gives us a glimpse into Flatiron-based startup culture."—Melissa Kravitz, amNY, Summer Beach Reads

"This entertaining story is about youth, ambition, love, money and of course the startup world."
—Allanah Dykes, Levo

Doree Shafrir is a senior culture writer at BuzzFeed News and has written for New York Magazine, Slate, The Awl, Rolling Stone, Wired, and other publications. A former resident of Brooklyn, she now lives in Los Angeles with her husband Matt Mira, a comedy writer and podcaster, and their dog Beau.
Loading...
or
Not Currently Available for Direct Purchase