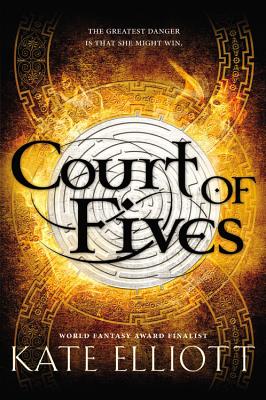 In this imaginative escape into enthralling new lands, World Fantasy Award finalist Kate Elliott's first bestselling young adult novel weaves an epic story of a girl struggling to do what she loves in a society suffocated by rules of class and privilege.

Jessamy's life is a balance between acting like an upper-class Patron and dreaming of the freedom of the Commoners. But away from her family she can be whoever she wants when she sneaks out to train for The Fives, an intricate, multilevel athletic competition that offers a chance for glory to the kingdom's best contenders. Then Jes meets Kalliarkos, and an unlikely friendship between two Fives competitors--one of mixed race and the other a Patron boy--causes heads to turn. When Kal's powerful, scheming uncle tears Jes's family apart, she'll have to test her new friend's loyalty and risk the vengeance of a royal clan to save her mother and sisters from certain death.

Praise For Court of Fives…

"Kate Elliott's magic and mastery is better than ever. Court of Fives enchanted me from start to finish, with characters and worlds that lingered long after I turned the final page."—Marie Lu, New York Times bestselling author of the Legend series and the Young Elites series

"This book is amazing. Kate Elliott combines everything I love best in a YA novel. Jes is a killer protagonist, tough and capable, but also lost in her upbringing and faced with impossible choices that test her character and her beliefs.... This book will not fail you."

"Fast-paced, tense, and riveting. I couldn't put it down, and you won't be able to either!"
—Tamora Pierce, author of the Tortall series and the Circle of Magic series

"Haunting. Epic. Impassioned. Layered. Breathtaking. This isn't just a novel; it is a coup d'état of the soul. Prepare to be ravished by Kate Elliott's Court of Fives."—Ann Aguirre, New York Times bestselling author of the Razorland trilogy

* "Jes will remind readers of fearless Katniss with her skill and strategy for games. But it's the fascinating descriptions of traditions, royal interactions, and, of course, the intensities of the Fives that will enthrall readers most of all. Let the games continue!"
—Booklist, starred review

"An imaginative journey.... Elliott creates an intricate and intriguing
story, conjuring a world of mysticism and centuries-old customs.
Jessamy's boldness and impulsiveness make her a striking heroine in a
male-dominated land."

"Sure to garner a following of adventure and suspense fans. While highly entertaining and fresh, the novel also speaks to issues of gender, class strife, and identity. Jessamy is an exciting protagonist: strong, quick witted, and smart.... This book is a winner, and readers will be clamoring for the next installment."
—VOYA

"A high fantasy novel that explores race, class, and gender struggles in a patriarchal society.... Jessamy is loyal and strong female protagonist who fights against injustice. This trilogy opener will be a hit with readers who love action-packed fantasy adventures."
—School Library Journal

"Full of high-stakes adventure but also heartfelt musings on identity, family and colonization, this book presents a fantasy world that is refreshingly inspired by Greco-Roman and Egyptian cultures."
—NPR

Kate Elliott is the author of more than twenty-five novels, including her New York Times bestselling young adult debut Court of Fives, Poisoned Blade, Buried Heart, and Black Wolves. She has also writtenthe Spiritwalker trilogy, the Novels of the Jaran, and the Crossroads trilogy, among others, and two of her books have been finalists for the Nebula Award and the World Fantasy Award. Kate was born in Iowa, raised in Oregon, and now lives in Hawaii. She invites you to visit her website at kateelliott.com or follow her on Twitter @KateElliottSFF.
Loading...
or
Not Currently Available for Direct Purchase